Over 70 jobs just disappeared on a 6 crane operation because of the robots at LBCT, and Bobby, Victor, and Julie are doing what ever they feel like, and not telling the membership what is going on.

Last week, Bobby, Victor, and Julie let the robot overlords at LBCT ordered 4 swingmen and 1 Hatch Tender on their initial operation, using the what ever they feel like method, which is not part of PCLCD as far as I know.

Check out the orders that Julie took, and that were dispatched to work the LBCT robot dock. 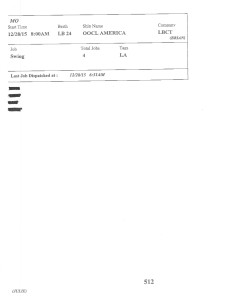 Why is there a Hatch Tender on the LBCT robot dock, when the TRAPAC robot dock uses a Signal Man?

LRC Rep Mike Dimon admitted that he had no documentation on the new operation, and said they were depending on the A-men dispatched to the job to tell them, and the Employers, if the use of a Hatch Tender is inappropriate.

Guess Cat Fish does not understand that the 8 hour job, that requires the man to be there 8 hours, is going to most likely get filled by an ID. Does he think the IDs are going to challenge the Employer, and/or report what is going on?

Maybe Mondo should get his ID kid to take the job and report back to the E-Board, like he did when he went to Canada?

Does Victor or Cat Fish know there is a procedure in the Contract that spells out exactly what should happen on the initial shift of a new operation?

Check out David Miller’s Arbitration on the initial operation at TRAPAC. SCAA-0007-2014

Arbitrator Miller made it pretty clear, like crystal clear, that “new operations” like the LBCT robot operation is covered by Section 10.51 of the PCLCD, as follows:

10.51 When new methods of operation are introduced after June 20, l972, the Employers at the Coast level shall submit to the Union a letter describing the operation and the proposed ship manning prior to the anticipated start of the operation. A copy of the letter shall be transmitted to the local Union in the port or ports where the new method of operation will take place. After such notification the following procedure shall be implemented:

Looks like Bobby, Victor, Julie, Mondo, Luke, and Cat Fish would prefer their “what ever I feel like,” “back door” method for the new LBCT operation, because at the last E-Board meeting Bobby told everyone that he was working on an agreement, similar to the one with TRAPAC, while Victor and Julie took the orders and dispatched men, without any documentation or JPLRC agreement.

Cat Fish’s theory that it is training and the members dispatched will report if the Employers are doing anything wrong, would be funny if it did not involve the future of the Dispatch Hall.

Cat Fish agreed that it was an operation, and admitted that there was no paperwork.

Someone needs to convince Bobby and his crew to “feel like” following the Contract, and tell the membership what is happening, and get membership approval.

Bobby and his crew are just feathering their own nests, and not telling anyone what they are doing. This has all the trappings of another one of Bobby’s cons, which is why everything is secret.

There is a reason the Employers sprung this “new operation” between Christmas and New Years, no one is home at the Union and they figured they could get away with doing what ever they felt like. 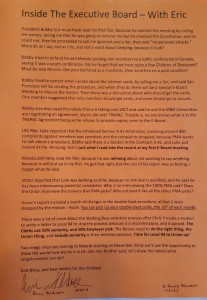 Bobby offered Eric $1000, to let him watch while Eric writes his next flier.

According to the Department of Justice press release from December 8, 2015,  Two Members of Dockworkers Union Charged in Scheme that Bilked Health Care Plan by Fraudulently Bill.

Does anyone really think that only 2 longshoremen were involved in the Port Medical scam?

The picture in the paper announcing the opening of the Port Medical Clinic had 3 longshoremen, Sergio, David, and Chris Rice.

What happened to Chris Rice? Nothing?

What happened to Chris Viramontes?

Remember the $500 check that Chris had Port Medical issue to Josh’s Church on the Reservation?

Eric does not know Sergio or David.

It was Chris Viramontes that called the bookkeeper and had her cut the check, to payback Eric, Josh, and New Change, for helping Mondo get elected Secretary/Treasurer, after meeting with him in a Torrence restaurant.

When Eric went to pick it up for Josh, who is to lazy to do anything for himself, he saw all the sports trophies from the teams sponsored by Port Medical, mentioned in the DOJ press release above.

Which makes me wonder; are Sergio and David going to run the risk of doing 400 years?

This is not over, it is just starting.

According to JOC’s Peter T’s tweet: “The ILWU was invincible when I covered it as SF bureau chief in the mid-1990s. No longer, as rulings like this show: http://www.joc.com/port-news/us-ports/port-portland-ore/federal-labor-board-affirms-ruling-against-ilwu-coercion-portland-terminal_20151204.html.”

“Federal labor board affirms ruling against ILWU for coercion of Portland terminal,” makes great copy and sounds impressive, if you don’t know anything about the Maritime Industry.

ILWU coercion is nothing new, and Elvis’s Company is not the first to win a Court Case against the Union, but they may be the first to try and enforce their Award.

More than a few PMA member companies have won Court Cases against the ILWU, but none ever actually enforced them; they were smart enough to understand that they still had to do deal with the ILWU if they wanted to stay in business.

Take the Grain Company that won all sorts of Court Cases against Big Bob and the ILWU during their “negotiations,” the first item in the MOU was that all the Court Cases would be dropped.

Is Elvis going to figure it out, or is he going for the WIN that puts his Company out of business for good?

The ILWU is going to be fine either way, and just as invincible. 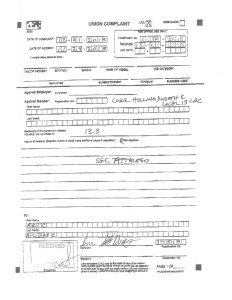 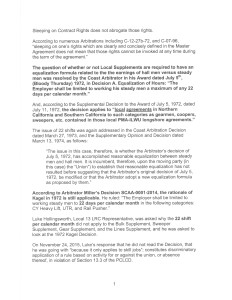 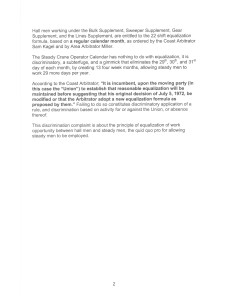 Why is it that at the Bulk Dock, when they work, there are 10 longshoremen and 9 of them are steady men, on both dayside and nightside? 20 jobs and only 2 go to the Hall!

Why do Gearmen only get ordered from the Hall, is when the lines on the dock need to be painted, or machines need to be fueled?

Why do the Linesmen just rotate among themselves, and send maybe 1 job to the Hall every 6 months?

Why do Sweepers only get ordered from the Hall, when someone goes on vacation, or someone gets injured?

The answer is; the 22 shift per calendar month, ordered by Coast Arbitrator Sam Kagel for all the Southern California Local Port Supplements, has been ignored by the steady men Union Officials in charge at Local 13, until last year.

Thanks to Arbitrator David Miller’s Decision SCAA-0001-2014, the door was opened to bring Equalization back to all steady categories covered by the Local Port Supplements.

This Section 13.3 Discrimination Complaint, is gong to bring the 22 shift per calendar month back and protect the Hall, because in case you have not noticed, the robots are coming, and when they get here you will be glad to have the jobs that are there because of Harry’s Equalization vision.

Equalization, the quid quo pro for allowing the Employers to have steady men, is going to save the Dispatch Hall, the soul of the ILWU.