Why is Local 94 President, Dirty Danny-boy Miranda, so upset about PMA filing grievances against longshoremen who were involved in the Port Medical benefits fraud?

Here is why. Check out this Employer Complaint that PMA filed against past Local 13 President, Chris Viramontes.

This is a BIG deal. This could, and should, get Chris Viramontes deregistered!

Not to mention, this exonerates Eric from Chris’ Section 13.2 conviction based on the “unsubstantiated rumor” that Chris was involved with the Port Medical fraud. Eric got 2 years off work for telling the truth and exposing the fraud.

This is the first of many Employer Complaints related to the Port Medical fraud.

In addition to Chris, 3 other Local 13 members, 1 Local 63 member, and 2 Local 94 members have received PMA Complaints. 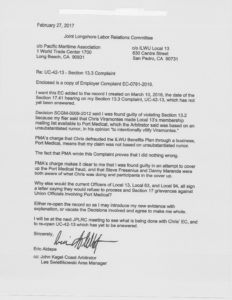 Or of those who prefer PDF: Eric – request to reopen for new evidence-2

If you were involved in the Port Medical fraud, you had better come clean because if you don’t you will be getting an Employer Complaint just like Chris Viramontes did.

You know who you are, and so will PMA because they have all the court documents from the indictment and pleas of the 2 guys who went down first.

Ever wonder why Danny-boy’s member Chris Rice was not named in any of the paperwork, even though it is common knowledge he was involved?

Because he rolled. How do you think they got the first 2 guys?

Either you come clean or PMA will use the court records to come and get you, and if that happens it will not bode well for you.

Come clean and make restitution now, and you stand a chance of keeping your job.

If you wait till they come for you, you will get the Chris treatment. And that silly letter the 3 Locals signed will not protect you.

Here is a copy of 1 of the court documents PMA will be using. Check out the pages listing check numbers and initials.

According to the DOJ Press release re Port Medical fraud, Crisanta Johnson, Regional Director for the Department of Labor’s Employee Benefits and Security Administration; “It’s unconscionable that the defendants would game such a sacred program to line their own pockets.”

Do the right thing, or it will cost you your job!

Mark has been heard talking about introducing random drug testing, as a way to get a raise in pay for operators in the future.

How is that possible given the language in Article X, Section 2, of Local 13’s Constitution?

“Any Officer or agent, or former officer or agent of a Corporation or Association of Employers, or a deputized city, county, or special police, or men proven to be members of, or former members of vigilante groups, shall be prohibited to membership in this Union.”

Eric got kicked off the Executive Board because he allegedly broke “the oath,” contained in the Constitution, but Jursic is an x-Cop and he is going to get elected President, never mind the Constitution.

Local 13 Officers just use the Constitution to do whatever they feel like, never mind what it actually says.

The Constitution says you have to be a member in good standing, with all your fines and dues paid, if you want to vote.

But Local 13 Officers say, never mind the fines, let them vote if their dues are paid.

Local 13’s Constitution is as worthless as the paper it is written on.

All I can say is, 5-O must be some ball washer.

And now for something from the WTF department:

Current Local 13 President, Bobby Olvera Jr., informed his members last week that he and the rest of the Local 13 Officers, along with the Officers of the Clerks Local and the Walking Bosses Local, drafted a letter to PMA stating that they are not going to process the Section 17 Complaints filed against members involved with promoting Port Medical in the Dispatch Hall.

Could it be because Bobby’s baby-momma worked at Port Medical?

Or, could it be because Port Medical sponsored Bobby’s boy’s Boy Scout Troop?

Or, could it be because Port Medical sponsored Mondo’s softball team?

Eric did 1 year off work for slander because he said past Local 13 President, Chris Viramontes, was a part owner of Port Medical.

PMA and Local 13 have refused to process Eric’s Section 13.3 discrimination grievance claiming discriminatory application of contract language for over 2 years, but now PMA has filed a grievance of their own claiming that Chris Viramontes used his position to promote Port Medical in the Dispatch Hall.

What do you think they will say when Eric asks for a copy of the PMA Complaint for his case?

Definitely more to come on this……. 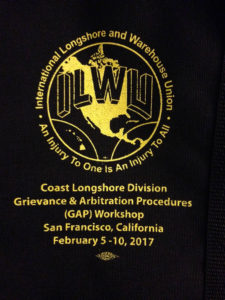 Wow, look what I found.

This is great. Now Frank Ponce de Leon and Cam Williams might learn how to process Eric’s Section 13.3 grievances.

Dumb ass Rich Austin might learn that longshoremen can represent other longshoremen at all Section 13 grievance proceedings, including the one he stopped in Seattle back in September 2016.

Go get all smart boys, then come out and play.

ps: Back in the day, when I worked at PMA, we gave monthly classes on grievance and arbitration procedures. We called them JPLRC meetings, and anyone could attend, for free.

If the ILWU was really serious about educating members, they would give them access to the database of all CLRC meetings and Arbitrations that their members paid for.

Two final thoughts: Are those attending GAP training going to be Certified (or at least get a pretty participation ribbon), and do the hours count toward Walking Boss/Formen’s registration?

Come on boys, schedule some grievances. Show us your stuff.

When Scott Mason decided to put himself back into the crane to finish the ship, after picking up a semi and dropping it to the dock and knocking the driver unconscious, he broke the law.

In Washington State, when a machine operator has an accident or even a near miss they are required to receive re-training before they are allowed to go back to operating equipment.

Because there is no Terminal Manager at the Matson terminal that outranks past Local 23 President, Scott Mason, he decided to put himself back in the crane after knocking out member Dave Glen.

For that the Employer received the following Safety violation complaint.

Or for those who prefer PDF; WISHA Safety violation complaint – Scott Mason

In the Ports of Tacoma & Seattle the fate of longshoremen is determined by who they are, not what they do, as evidenced by what happened to Scott Mason.

If the same thing had happened to a regular longshoreman, i.e. not an officer or a friend or relative of an officer, he or she would have been removed from the crane and a complaint filed, depending on whether or not they are liked by the current Local Officers.

Robert Wilson has been denied crane training for 4 years because he broke a dog off a hatch cover, while being watched by his trainer, but other past Presidents have dropped cans in the water or ripped off radar antenas and nothing at all happened.

Wonder what the Northwest Seaport Alliance crane productivity agreement will do about this?

NOTHING because Local 23 President, Dean McGrath, is not stupid and he did not sign the Agreement with Local 19’s Chief Ball Washer, Rich Austin.