Ratification of the Memorandum of Understanding signed March 4th is all but guaranteed, after the first day of the dog and pony show known as the ILWU Caucus.

The super secret talks about the secret negotiations are in full swing and future International President Bobby Olvera Jr. and his crew are hard at work protecting the interests of the steady men and mechanics, along with everyone else of course.

Big Bob has all his people in line and I am sure they are all telling him how great he is, and what a great job he did.

The once great ILWU had become the super secret country club union that Bog Bob and Bobby O dreamed of as little kids, while they were honing their skills by picking on their classmates at recess in the 3rd grade.

Congratulations, winning with deception and bluff really does work.

The Tentative Agreement will be ratified at the end of the week, and by the membership in short order.

Bobby O Jr. has been talking up a storm about the Memorandum of Understanding in his Random Lengths News interview and at a recent luncheon where he has been claiming that training for the future is the key for success for the ILWU and Local 13, at the same time he has been working his political machine trying to derail the ratification process.

While pretending to be a good Union man, Bobby O and his henchmen have been using the Executive Board of Local 13 to pass motions that are intended to derail the ratification.

At the E-Board meeting 2 weeks ago, Bobby was upset that the 10th hour he was trying to get for his mechanic buddies did not make the cut in the contract talks in San Francisco, even after he brought his friend Mayor Garcetti in to try and help his cause, so he and his supporters passed a motion to require the Caucus Delegates to vote no on the tentative, without even seeing it.

It does not matter that they do not have the authority to order the Delegates to vote, they passed a motion anyway knowing that most will do what they are told to do without question. In the ILWU that is the definition of a good union man.

On Tuesday this week the Caucus Delegates held their first meeting and one of the motions they passed was a motion by Eric Aldape to bring recently elected Delegate Mark Mendoza in addition to Bobby’s choice, a mechanic who was not elected and does not work as a mechanic any longer.

Bobby O and his supporters were angry about Eric’s motion and not getting their way, so at yesterday’s Executive Board Meeting he had a motion passed to set aside the Caucus Delegates motion and to send his choice and to give his choice a voice at the Caucus even though he was not elected.

It does not matter that Robert’s Rules of Order do not allow a motion to be set aside except by membership action, Bobby is using all his political weight to do what ever he wants.

Bobby O is a con man and a liar. His big plan to train the members has nothing to do with training, he put language into the Local Port Supplement that would require Employers to pay crane drivers crane pay, even when they do not drive crane.

Here is a copy of the MOU dated 3-4-15, read for yourself, then ask Bobby to see the Local Port Supplement language he is talking about.

Time to see if the ILWU guiding principles are for real or not.

It has been reported that Bobby is now making a move to have Eric removed from his Caucus Delegate position because I posted a copy of the MOU on my blog. He is meeting with Big Bob to make his pitch.

Maybe he does not know that the Bosses at APL were passing out copies last night. Get real Bobby. 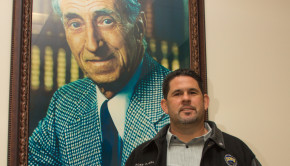 Bobby Bridges held court before the last Union meeting, and his buddy from Random Lengths News was invited into his office to observe the Union Boss multi-task.

Remember Random Lengths, that is the free paper that Bobby kicked out of Local 13’s Dispatch Hall after they wrote about Eric?

There back, and kissing Bobby’s ass. Read all about it.

Caucus Delegate Flier #2 was handed out at the Local 13 Dispatch Hall this morning.

Big changes to the Section 13 Discrimination procedure, but NO equalization. 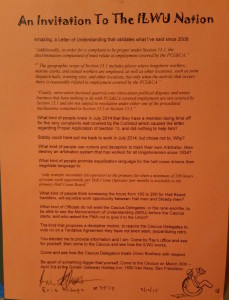 Looks like the Caucus in San Francisco, on March 30th – April 3rd is going to be interesting.

Big Bob is going to retire with a bang.

Last week selected longshoremen received sub poenas to appear before a Grand Jury investigating alleged medical fraud under the ILWU/PMA Healthcare Plan in connection with Port Medical, a clinic alleged to have been owned by ILWU members and/or their families.

With an estimated $100 million in alleged medical fraud being investigated, it seems that quite a few Local 13 and Local 63 members will be called to testify.

Is it time for the ILWU to fess up, to their mess up?

Remember, the first one to roll over usually gets immunity.

Bad boy, bad boy, what you going to do when they come for you?

According to the Letter of Understanding on Proper Application of Section 13, dated July 1, 2014 and signed on March 4, 2015, NONE of the Section 13.2 grievances filed against Eric, including the one filed by Chris Viramontes which resulted in his being placed on no-dispatch for the last 2 years, including a 5 year ban on night work, are covered by the PCLCD.

The Letter of Understanding explains, for the exact reasons given by Eric during the Arbitrations, that grievances involving internal Union matters are not covered by Section 13.

The Letter of Understanding also explains that the “geographic scope of Section 13.1” does NOT include the alley across the street from the Local 13 offices.

“Additionally, in order for a complaint to be proper under Section 13.1, the discrimination complained of must relate to employment covered by the PCL&CA.1

1 The geographic scope of Section 13.1 includes places where longshore workers, marine clerks, and casual workers are employed, as well as other locations, such as joint dispatch halls, training sites, and other locations, but only when the activity that occurs there is reasonably related to employment covered by the PCL&CA.”

No wonder the Union did not want the MOU distributed to members before the Caucus.

The letter dated July 1, 2014, shows that the Union knew and agreed that the reasons that Eric was off work are not covered by the Contract while he was still off work, and they did nothing.

The Union could have put Eric back to work in July, but left him hanging until his penalty was up at the end of December. That is 6 months he could have been working but for the Union’s failure to represent him.

Expect to hear much more about this at the Caucus.

This SHIT is about to hit the fan.

Just another unconventional move by the ILWU negotiating team, or an attempt to keep information from the rank-and-file while they ram the MOU through the ratification process?

The behavior of the ILWU directly conflicts with their belief that if the rank-and-file gets all the information, they will almost always do the right thing.

The new ILWU motto: Wining thru deception and bluff.

It is no secret that the ILWU, specifically Big Bob, wanted to get rid of Arbitrator David Miller.

What is secret is why Big Bob wanted to get rid of the Unions choice, ILWU Local 63 member David Miller, who has been the Southern California Area Arbitrator since 2002.

Big Bob, in a letter to all Longshore Division Locals and Pensioners dated February 11, 2015, accused without naming, David Miller, of having “openly engaged in conduct that clearly compromises their impartiality, including the development of close and personal relationships that affect decision-making and the failure to disclose these particular relationships and conflicts of interest”.  McEllrath Letter 2-11-15

Big Bob does not identify specifically what conduct he his alleging compromised David’s impartiality.

Big Bob also fails to identify which “close and personal relationships” he is concerned about, or which of Miller’s Decisions were “affected”.

Big Bob wraps up his letter with a false claim; “Both parties have recognized at the bargaining table that there is a problem, but, since the bias favors the employers, PMA is refusing to take corrective action.”

Bob’s claim is a flat out lie. The only one at the bargaining table that had a problem was Big Bob.

Big Bob forced the PMA to agree to throw out an arbitration system that has been in place since 1934, without ever filing any complaints related to any inappropriate behavior or any biased Decisions, because he wanted to have his own member David Miller removed. 1934 Arbitration Decision

Bob agreed to replace the current 4 (2-PMA 2-ILW) Arbitrators with 4 panels of 3 Arbitrators (1-ILWU 1-PMA 1-Neutral Professional), so now 12 Arbitrators will do the work of resolving PCLCD disputes, adding 1-2 million dollars per year to the cost of Arbitration which is split on a 50/50 basis.

Under the “new” system, on-the-job disputes like safety, picket lines, and claims of onerousness or speedup, will be heard by either the ILWU or PMA Arbitrator based on the flip of a coin.

All other disputes will be heard by the panel of 3 Arbitrators; 1-ILWU. 1-PMA, and 1 neutral professional.

How is that better for the ILWU or the PMA?

Big Bob refused to drop his demand to have David Miller removed, and under pressure from the Secretary of Labor, PMA offered the Union a deal they thought the Union would reject, only they accepted and now both parties are saddled with a whole new Arbitration procedure.

The “new” procedure will be 3 times more expensive and, more importantly, the Union will lose all the benefits associated with having Union members decide longshore issues related to discipline and manning, and everything else referred to the “new” Arbitrator panel’s lawyer or retired Judge. You can forget about all the past practices arguments, they will be gone.

What were you thinking, Big Bob?

March 3, 2015 the ILWU and PMA signed the Memorandum of Understanding that contains the tentative agreement reached after intervention by the Secretary of Labor.

For some reason the Union has asked PMA not to distribute the document until after the ratification process has been completed.

What is the Union afraid of, or ashamed of? Aside from the ridiculous Arbitration change, it is a very good agreement.

Ask the Union why they will not show members the signed Memorandum of Understanding?