Interesting how the CHP Commercial Division truck inspectors use creepers to go under the trailers/chassis when doing their roadability safety inspections, but according to the Letter of Understanding ILWU & PMA mechanics are forbidden from going under the chassis they inspect during the on-the-dock readability safety checks required by the PCL&CA.

Read the ILWU/PMA letter for yourself. Letter of Understanding Chassis

I’ll bet the trucks being inspected by CHP Inspectors are required to have the engines turned off before the CHP Inspector goes under the chassis on a creeper. The ILWU/PMA letter says the driver cannot get out of the cab, and says nothing about turning off the engine.

Does anyone else have a problem driving next to a 40 ton container sitting on a chassis that was not properly inspected for roadability safety?

Who did Big Bob have to threaten to get this letter signed?

I  don’t think David Miller would have allowed the PMA to forbid Union mechanics from doing their jobs, but Big Bob “fixed” that.

Do you think someone will have to be killed before PMA decides to do proper safety inspections?

Read for yourself what happened to ILWU member and ILWU/PMA Area Arbitrator David Miller.

How can any self-respecting Union man vote yes on the Tentative and back Big Bob’s despicable treatment of one of his members?

If the members refuse to stand up against the injury being done to Brother David Miller, who do they think is going to stand up for them when they need help?

If Secretary of Labor, Tom Perez knew about this and did nothing, shame on him, and shame on PMA for not doing the right thing.

Do you think the longshoremen who got tummy tucks for their wives (or girl friends) will have to pay it back?

SANTA ANA, California –A federal jury has convicted two Southern California residents in connection with a scheme to defraud union and private health insurance programs by submitting bills for more than $71 million – and receiving over $50 million in payments – for medically unnecessary procedures performed on insurance beneficiaries who received free or discounted cosmetic surgeries.

A large number of the fraudulent claims were submitted to the International Longshore and Warehouse Union and Operating Engineers Union health insurance plans. Other victim insurers included Aetna and Anthem.

The evidence presented during a six-day trial showed that members of the scheme lured insured “patients” to a surgery center in Orange with promises that they could use their union or PPO health insurance plans to pay for cosmetic surgeries, which are generally not covered by insurance. The surgery center was known at various times as Princess Cosmetic Surgery, Vista Surgical Center, and Empire Surgical Center.

Marketers such as Hardgraves referred “patients” to the surgery center, where they were told they could receive free or discounted cosmetic surgeries if they underwent multiple, medically unnecessary procedures that would be billed to their union or PPO health care benefit program. Fisher was a consultant at the surgery center who scheduled procedures after telling the “patients” about the free cosmetic procedures they could receive and coaching them to fabricate or exaggerate symptoms so that their medical procedures would be covered by their insurance.

The unnecessary procedures typically performed on the “patients” were endoscopies (usually sophagogastroduodenoscopies, or EGDs), colonoscopies and cystoscopies. Once the health care benefit program paid the claims, the patients were given free or discounted cosmetic surgeries, including “tummy tucks,” breast augmentations and liposuction. In some cases, the surgery center simply billed cosmetic procedures (such as tummy tucks) as if they were medically necessary procedures (such as hernia surgeries).

Fisher and Hardgraves are scheduled to be sentenced by United States District Judge Josephine L. Staton on May 29.

A third defendant in this case – Vi Nguyen, 31, of Placentia, another consultant at the surgery center – pleaded guilty in January to four counts of mail fraud and faces sentencing before Judge Staton on July 10.

At sentencing, each defendant faces a statutory maximum sentence of 20 years in federal prison for each count of mail fraud.

If I were Jerry Avila or Chris Viramontes, I would be worried.

Or, is this a case of never mind, they are longshoremen, they can do anything and get away with it?

Read the Caucus Minority Report and the 3 reasons to vote no on the tentative. 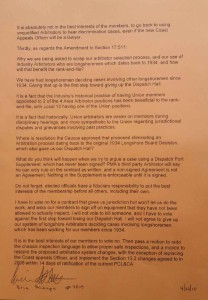 Vote no, and send the negotiators back to fix it before someone gets killed.

Check out Eric’s “Its a brand new day, so let a man come in and do the popcorn” flier that hit Local 13’s Dispatch Hall this morning. 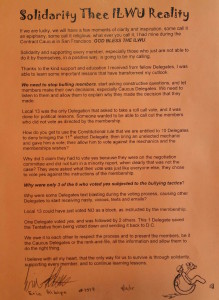 Rumor has it that the Union convinced Eric to focus his energy on going after the PMA.

Get ready for some fun.

When it came time to discuss the NLRB charges related to the Proposed Settlement Agreement, one of Local Caucus Delegates took the microphone and started bad mouthing the Local 13 member whose rights were violated without the member being present, something that is not allowed in Local 13.

Although no one told the speaker to not talk about a member who is not present, one member did point out that the speaker was the one that refused to allow the Local 13 member to work at the SIM, that the Executive Board and every other Official said they thought the member should be able to work.

Against the recommendation of the Executive Board the speaker and the past President presented a motion to pass a rule to prevent the Local 13 member from working, then had the membership approve it.

That rule was challenged and the NLRB found merit to the charges.

If the speaker would have kept his mouth shut and followed the Executive Board recommendation, there would have been no NLRB charge.

Lessons learned: it is not nice to talk about people who are not there to defend themselves, the Executive Board does know what they are doing, and longshoremen are not in the business of hurting other longshoremen.

Now all members, including Local 23 members, can work at the SIM if they ever get put on no-dispatch by PMA.

The guy’s running Local 23 got so upset about my posting the NLRB’s Proposed Settlement Agreement that they called the NLRB and complained.

What, they don’t like that I am shining a light on their bully tactics?

They don’t have any problem denying a member their dispatch rights, and bullying the shit out anyone who even questions them about why they are doing what they are doing.

When the NLRB issues a Proposed Settlement Agreement, it is not a wish list or a negotiable document, it is a thought out well crafted attempt to resolve what they believe is a violation of the ACT.

Local 23 does not like it that I am exposing their bully tactics, and they think they can bully me and my website.

Today Local 23 was sent the following proposed Settlement Agreement regarding dispatching members on PMA no-dispatch to the SIM rail ramp in the Port of Tacoma and the Internet Posting rule passed last year.

Of course signing the Settlement Agreement is not an admission of any wrong doing, but they do agree to stop doing what they were not doing to begin with.

Welcome to the wonderful world of the NLRB. 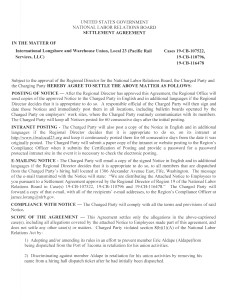 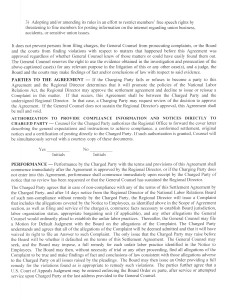 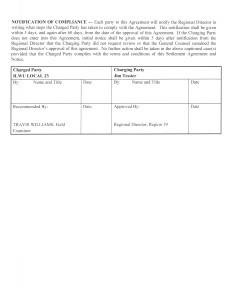 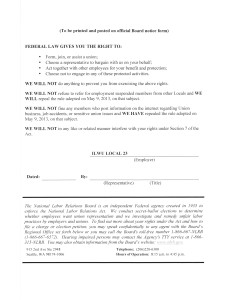 If Local 23 does not agree, there will be a trial in June.

Either way works for me.

What kind of show is Bobby Bridges Jr. going to put on for the membership when he explains the Tentative Agreement and then tells them how to vote.

Which Bobby will show up?

Will it be the Bobby who lead the ILWU parade shouting fuck PMA, or will it be the Mayor’s new buddy ready to single handedly fix all the congestion problems with his steady workforce and new FMCS Arbitrator?

Rest assured, what ever Bobby does will be best for Bobby and his steady crane driver and mechanic buddies.

Time to register some future Bobby voters? Yes, yes it is.

The short answer is, when they started to refuse to provide information to the membership such as JPLRC Minutes and Executive Board minutes.

Cults cause people to be drawn into a belief system that causes them to behave like they never thought they would.

That is exactly what happened to Local 23 President, Dean mcGrath.

When Dean was a causal he filed grievances against the Union and was part of a lawsuit filed by 58 longshoremen who did not get registered in Tacoma.

As a B-man, Dean filed more complaints than any other member of his registration class.

Now that Dean is the President of Local 23, he is doing exactly what he had complained about being done to him, when he was not a member.

Dean has been drawn into a belief system that is causing him to behave like he never though he would.

Dean is now a member of a Cult, and he justifies his behavior by claiming he is protecting the Union.

Got news for you Dean, you don’t protect the Union by lying to the members and by refusing to provide them information.

You don’t protect the Union by getting rid of the Union’s Arbitrator by filing false claims against him that are flat out lies, and refusing him due process and his right to face his accuser.

Tell me Dean, did the Union turn into a Cult before or after you became a pirate? 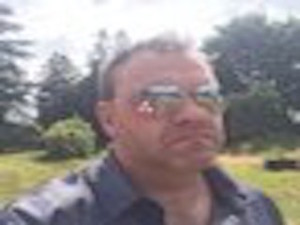