Local 23 “took it to the outside” on inauguration day, January 20, 2017, when Business Agent, Dave Basher, lied to Eric saying he was on “no dispatch to the SIM,” and that there was a “letter from the Coast.”

Here is the letter Basher claims is form the “Coast” and says Eric is on no-dispatch to the SIM. 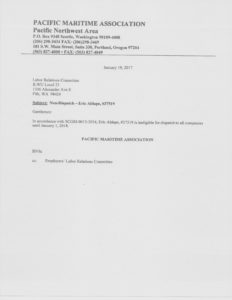 The Letter is NOT from the Coast, says nothing about the SIM, and cannot be enforced according to the Settlement Agreement reached the last time Local 23 tried to refuse to dispatch Eric in 2015. 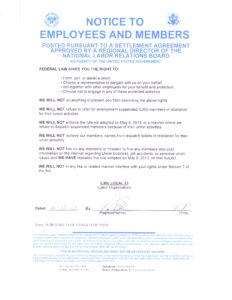 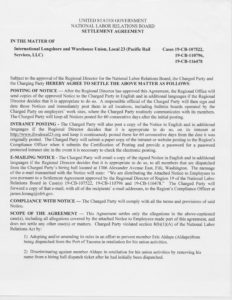 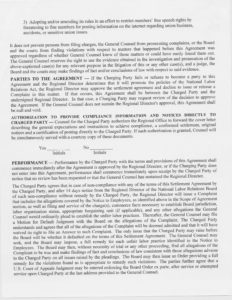 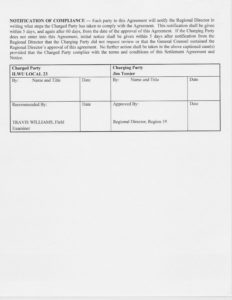 How anyone at Local 23 could read that, they say they have the right to deny him employment at the SIM while on no-dispatch over his Walking Boss Shape-Up cartoon?

Nubie PMA employee, Bill Nelson got used by someone at Local 23 to put this letter out, just so they could use it to refuse to dispatch Eric.

Local 23 “took it to the outside” when they used a PMA Arbitration to try and stop Eric from working at a non-PMA job.

NLRB charges have been filed against Local 23 and PMA for refusing to dispatch Eric to the SIM. 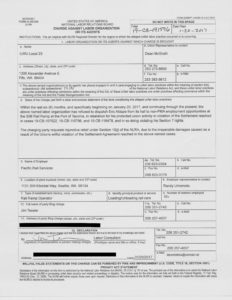 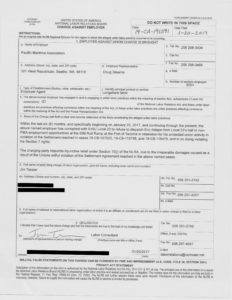 What does Dave Basher think he is doing?

Did he read the article on Page 3 of Local 23’s webpage newspaper?

According to the article on page 3:

“AN INJURY TO ALL

An injury to one is an injury to all. We can put that principle to work by defending the people Trump is attacking, starting with our own members.”

Why is Local 23 attacking one of their “own members” instead of defending him?

Is this another case of; do as I say, not as I do?

As soon as the NLRB starts doing affidavits the gloves will come all the way off, and you will be able to read the 19 page appeal PMA filed trying to protect Eric from his own union.

Unfortunately all the appeals were unsuccessful and Eric had to go back to the SIM to work to support his family, while he decides what to do.

Now Dave Basher and Local 23 have taken that away from Eric by refusing to dispatch him to the SIM.

Did they forget that 2 years ago they allowed one of their members to work at the SIM while he was on no-dispatch to all PMA companies for assault?

We are doing what we need to do.

You can help by visiting Eric’s GoFundMe page and making a donation.

Up until yesterday I thought that the following JOC article about increased productivity and the ILWU/PMA early talks was wishful thinking at best.

That was until I read the following Agreement between Local 19 and the Northwest Seaport Alliance. 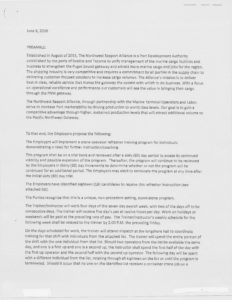 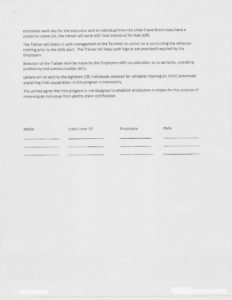 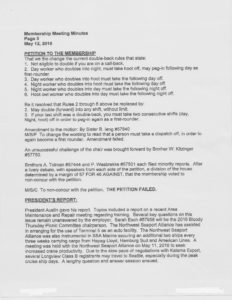 Who would have thought that the key to increased crane productivity would be a NON-PMA member group seeking to “increase Port marketability by driving production to world class levels.”

I hope the NON-PMA agriculture group and/or the NON-PMA retailers group are paying attention, they might learn something.

Never mind that the Agreement is a hip-pocket agreement in violation of Section 24.2 of the PCLCD. 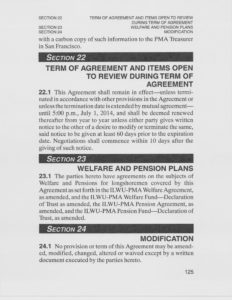 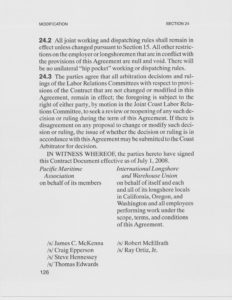 What kind behavior would “demonstrate the need for further instruction/coaching?”

What kind of measurements are “they” going to use and how is the measuring going to be done?

These questions are usually answered through the collective bargaining process, but that did not happen here.

Do the morons that wrote; “The Parties recognize that this is a unique, non-precedent setting, stand-alone program,” really think they can stop others from demanding the same from other Locals with that language?

What is Rich Austin going to get out of this?

How about an all expense paid vacation to God knows where, to help the Northwest Seaport Alliance increase Port marketability? First Class of course.

Way to go Rich. Ask your Union buddies how they feel about your Local agreeing to set minimum production standards (crane moves per hour) for the first time on the West Coast?

Nice JOC puff piece about the chassis situation in the Ports of New York and New Jersey.

No one is talking about chassis on the West Coast because Big Bob ordered his ILWU mechanics NOT to cause any problems.

ILWU mechanics have been ordered to not question any truck driver who says his chassis is “company” owned, which makes the chassis exempt from the mandatory ILWU roadability inspection.

I predict the chassis issue will be back for the 2019 negotiations.

Cute article in the JOC about the ILA’s stance against “fully” automated docks. Sounds like work slowdowns and/or work stoppages are about to start, because of the East Coast’s failure to deal with automation on the docks.

The ILA could take a page from the ILWU play book known as the M&M Agreement.

Harry Bridges had the insight to see what mechanization was going to do to the waterfront and negotiated the M&M agreement which was signed October 18, 1960.

Here is the JOC article, it is worth reading.  ILA automation stance signals tough labor talks

The New York Times would rather write about “On the Waterfront” and the alleged mob connections to the ILA, which is kind of interesting but does nothing to shed light on what is going on today.

There are no mob connections on the West Coast to write about.

The only corruption on the West Coast is the ILWU going after the Union’s premier activist by ordering the Arbitrators to give the man 1 year off-work for a political cartoon.

The flier distributed about the on-the-job “shape-up” being run by Local 94 Walking Boss President, Danny Miranda, and some of his members got Baby Boy Danny so upset he went crying to Big Bob to demand that he do something.

Did Big Bob order his Arbitrators to give the Activist 1 year off-work for the following flier? 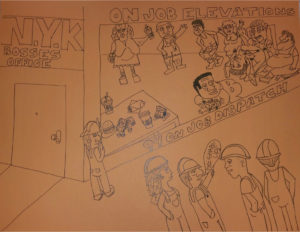 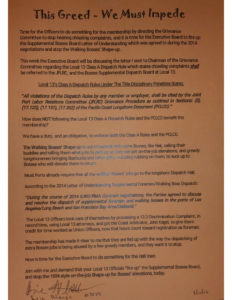 Why is it that no “journalists” want to write about the lack of free speech in the ILWU, despite the letter Big Bob wrote to President Obama about supporting civil rights and the Standing Rock protesters?

More do as I say, not as I do Unionism from the ILWU, because PMA had no problem with the cartoon?

I for one can hardly wait for the ILA contract fun and games to start, especially now that Trump is in charge.

Win/Win outcomes are rare in legal disputes, but that’s what Karey got for Christmas from Federal District Court Judge Lasnik.

TTI’s  lawyer got what he wanted, Karey’s Small Claims Court claim was dismissed by the Federal District Court, but the way the case was dismissed is beautiful, and gave Karey insight to accessing the grievance procedure in a way that no one that I know of ever has.

TTI opened the door for individual longshoremen to bring grievances under Section 17.124 against their employers.

Pay specific attention to page 3, lines 15 – 26, and say thank you to Bob Frazier and Karey Martinez for standing up for your rights. 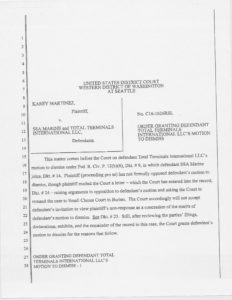 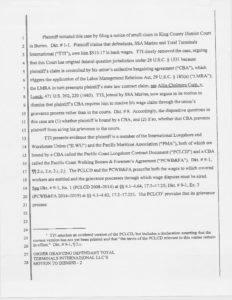 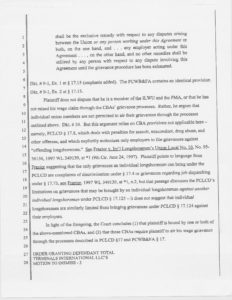 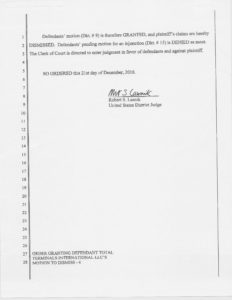 Or for those who prefer PDF; US District Court Case C-16-1626RSL

Time to make Big Bob’s new crew of Arbitrators work for the $12,000 per month that they are now getting paid, just to deny Section 13 grievances?

Time for individual longshoreman to look for the helping hand at the end of their own arms, and file some grievances against their employers?

Time to separate the ball washers from the Union men?

Happy New Year, ILWU, and best wishes to all longshoremen.