That’s right, the Trial Committee found Eric guilty and agreed to ban him from the Union for life, with no evidence, no exhibits, and without telling him what he did.

Read for yourself how Bobby Olvera Jr, Victor Hudak, and John Seixus are trying to kick Eric out of the Union.

Read Victor’s letter that came with the transcript, including 4 documents.  None of the documents that he sent Eric were entered as exhibits as he claims. 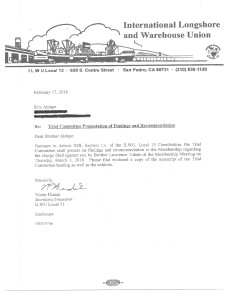 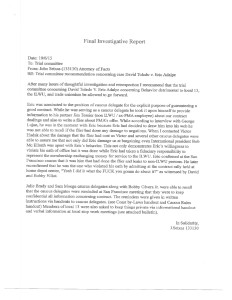 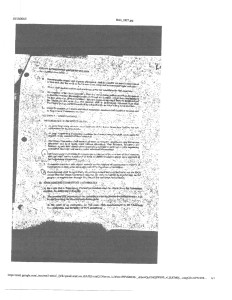 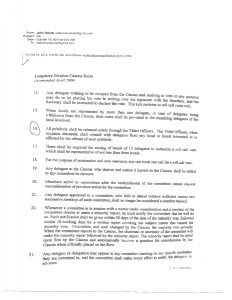 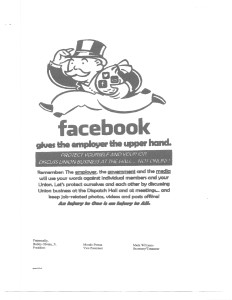 Here is the transcript. (had to break it into 3 parts to scan it in) 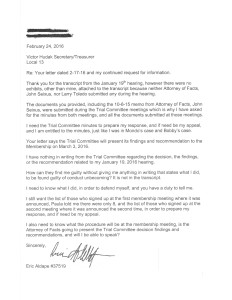 Bobby Olvera Jr, Victor Hudak, John Seixus, and Larry Toledo plan on banning Eric from the Union for life at the Union Meeting on Thursday, March 3, 2016, without telling him what he did.

How can any self respecting Union member stand by and allow Eric to be kicked out of the Union for this bullshit?

This shows how Bobby Olvera Jr, John Seixus, and Larry Toledo have been using their Trial Committee Kangaroo Court to screw over members for the last few years, and to eliminate any political challengers like Eric and “The Greek.”

What kind of Union members do this to each other?

Time to go to the Union meeting on March 3rd and stand up for Eric, if not, this is what the beginning of the end of a great Union looks like.

Their, but for the grace of God, go I.

Time for the real ILWU to stand up and do the right thing? 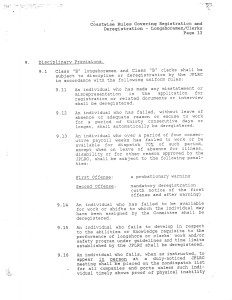 For those of you that have never seen it, here is the entire document called the Coastwise Rules Covering Registration and Deregistration. (It takes a while to load, it is a big file)

It is not that complicated, each month the Local posts a list of the B-men hours that shows the 70% number.

If you are below the 70% number you have to supply an excuse to the JPLRC. You have to do this every month, even if it is the same reason.

Learn to play the game, if you want to keep your job, and do not depend on anyone else to cover your ass.

Check out the letter Eric received from Local 13, Secretary/Treasurer Victor Hudak, in response to 2 letters he wrote to President Bobby Olvera Jr. 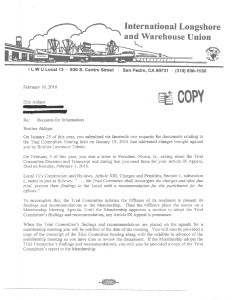 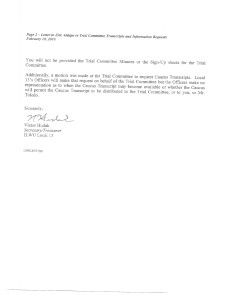 Little Bobby is to busy doing what ever it is he does to respond to letters written to him, he has his boy toy Victor respond for him.

This is the kind of letter you get when the assholes running the Local, including the puppet Trial Committee, are out to fuck you over.

Although it is frustrating to get bullshit letters like this, they do present an opportunity to engage and this is what that looks like. 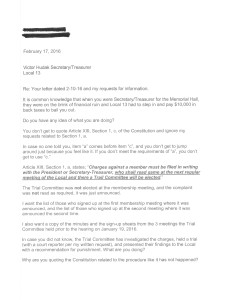 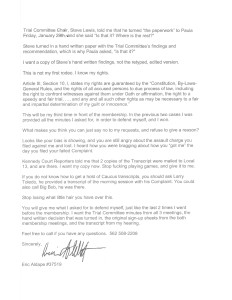 What kind of Union treats their members like this?

Why the ILWU of course, this is how Little Bobby and Big Bob roll.

This ain’t over, we are just getting started.

If any Local 13 B-men do not understand the 70% rule, it is because the “Union Officers” are to stupid to explain it.

How is it that B-men are required to attend mandatory monthly meetings, and “your” Chairman of Stewards, Frank Toscano, was not able to explain the 70% rule during these meetings?

This meeting is voluntary, so they don’t have to pay you.

Everything you need to know about the 70% test is in the JPLRC Minutes, but they are secret.

Are Bobby, Mondo, and Victor so fucking stupid they can’t do what every other Local does, they have to hold a “voluntary” (unpaid) meeting?

YES, yes they are.

What is wrong with the Trial Committee?  Why won’t they give Eric their Decision?

It’s not like they don’t know what to do, John Seixus and Larry Toledo have been playing musical chairs with the positions of Chair and Attorney of Facts for the last few years. They know exactly what they want to do, but they can’t.

They can’t do what they always do, they can’t create their own record, or should I say their own lies.

Usually they ask a bunch of questions, then twist the answers and use their made-up bullshit to find members guilty.

Eric exercised his right to have the hearing transcribed and offered to pay for it. The Trial Committee agreed to his request and agreed to provide him a copy, in writing. 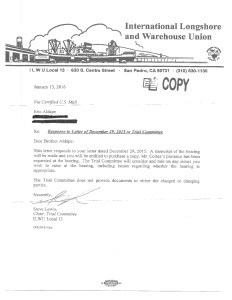 They thought they had Eric. They were going to get Eric to answer their questions, then use his answers to find him guilty, only Eric did not play ball the way they expected him to.

Eric refused to answer any questions, and they did not know what to do. They got flustered at his refusal to plea guilty or not guilty and tried to start asking questions. When Eric told them he was not a witness and he was not answering any questions, Bobby sat back in his chair and threw his arms in the air.

Eric told the Trial Committee Chair; “This is your show, I’m just here because you invited me, get on with it.”

Bobby O Jr. went on to testify, on the record,  about all kinds of stuff including the Local 13 Delegates being divided, the partying that went on at the Caucus, and about the Facebook posts of Caucus Delegates who were playing with family when they were supposed to be working, none of which had anything to do with Eric’s charge.

Steve Lewis turned in his hand written Decision, but has NOT provided a copy to Eric.

Eric keeps hearing he was found guilty and his penalty is to be read out of the Union, but he has no written response and he is being denied a copy of the transcript that Bobby promised.

Last week Mark Gallardo tried to kick Eric off the Grievance Committee telling him he had been read out of the Union, he called in the security guard to remove Eric.

When Eric asked when he was read out by the membership, Larry Toledo told him the Trial Committee read him out and they are the membership.

Eric refused to leave. He went to see Bobby but Bobby was not in, so he explained what was happening to his secretary . She asked if Eric had anything in writing, and he said he did not. She said go back in the room and sit down. A few minutes later, she came to the Trial Committee meeting and told Mark that Bobby wanted to speak to him on the telephone. Mark went to talk with Bobby and came back and said Eric did not have to leave.

Time to provide Eric his Decision and a copy of the transcript, so he can deal with it and get back to his passion: Equalization.

Part 2.5 of the Trial Committee saga, more to come.