We got a posting with 2 eagles and the NLRB logo that says;

“WE WILL NOT threaten you physically or intimidate you because you engaged in protected concerted activities.”

As soon as Compliance sends out the Posting, it will be posted here.

Thank you PMA and Local 19, for another win-win Complaint resolution.

That depends on whether they are coming after you or, you are going after them.

According to documents filed with the NLRB by both the ILWU and PMA, dispatchers are NOT agents of the JPLRC.

They sure act like agents when they call all the shots related to dispatching and when they order people around the dispatch hall.

However, if one of them belly bumps you across the hall and threatens to kick your ass, they are NOT agents of the ILWU and PMA.

Just another example of the; heads I win, tails you lose, management style of the corrupt morons currently in charge of the ILWU and PMA.

Come and watch the lawyers for the ILWU and PMA lie like rugs.

I’ll be there, I got subpoenas from both the ILWU and PMA.

Here is a copy of the memo Eric sent to Dean McGrath after the phone call he had with him on March 1, 2018; 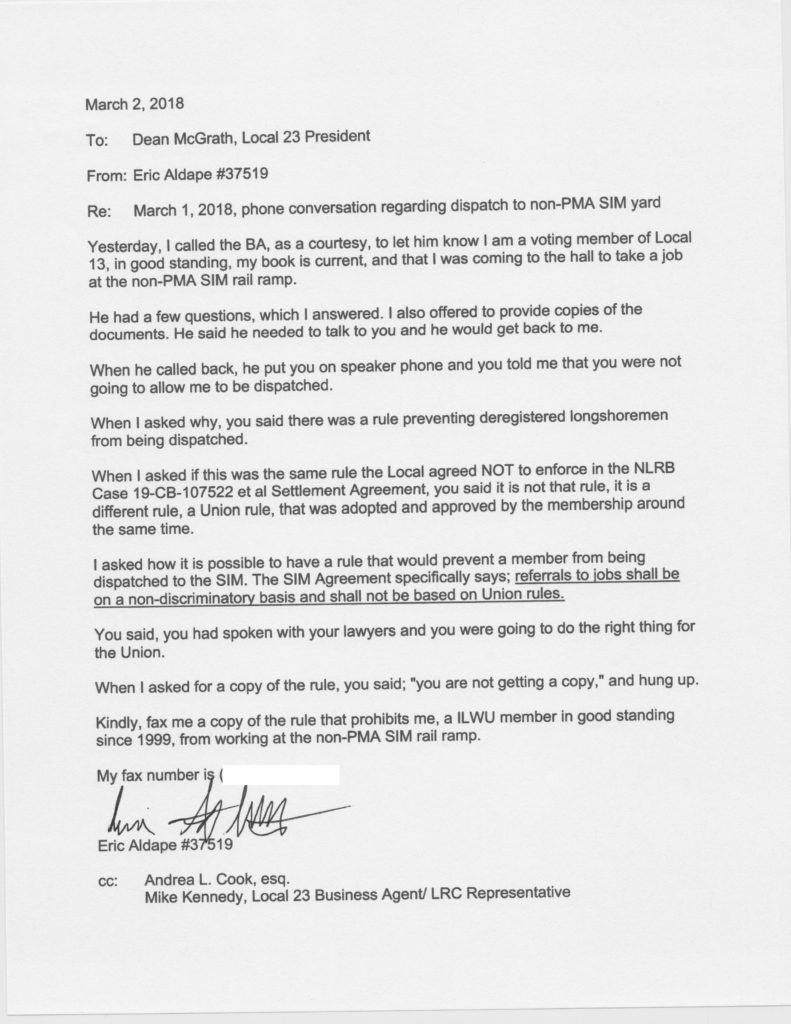 Eric faxed the memo to Local 23 along with a copy of the Pacific Rail Ramp Agreement and the posting and Settlement Agreement from Case 19-CB-1075222 et al.

Dean must have noticed that Eric sent a copy to his lawyer because he decided to respond in writing.

Dean, you really should have considered the consequences of putting your lies in writing.

Here is Deans response to Eric; 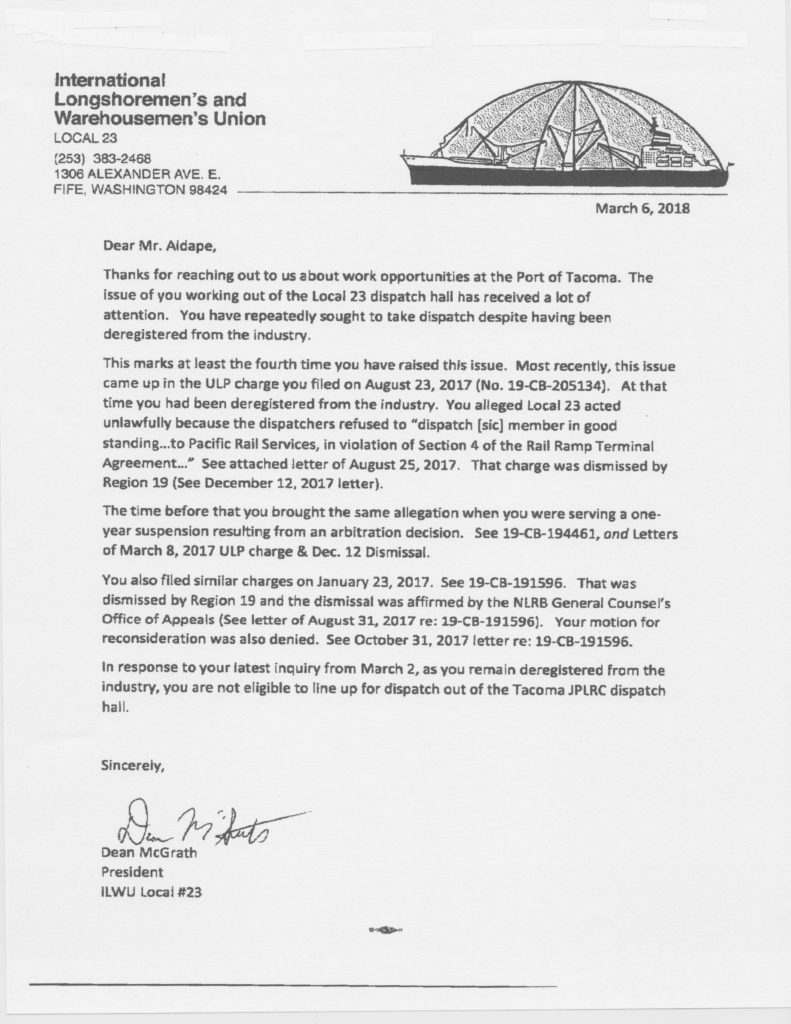 For starters, Eric is not some job hunter looking for “work opportunities at the Port of Tacoma,” he is a dues paying, voting, member in good standing of the ILWU, and has been so since 1999.

In case no one told you Dean, “the industry,” is bigger that just the ILWU/PMA Agreement.

Also, in case no one told you, being deregistered DOES NOT have anything to do with Union membership. The words registered and/or deregistered do not appear in the Constitution of Local 13, or the International’s Constitution.

The first charge related to Local 23 refusing to dispatch Eric to the non-PMA SIM rail ramp resulting in NLRB Case 19-CB-107522 et al Settlement Agreement and the following posting, was based on the truth; 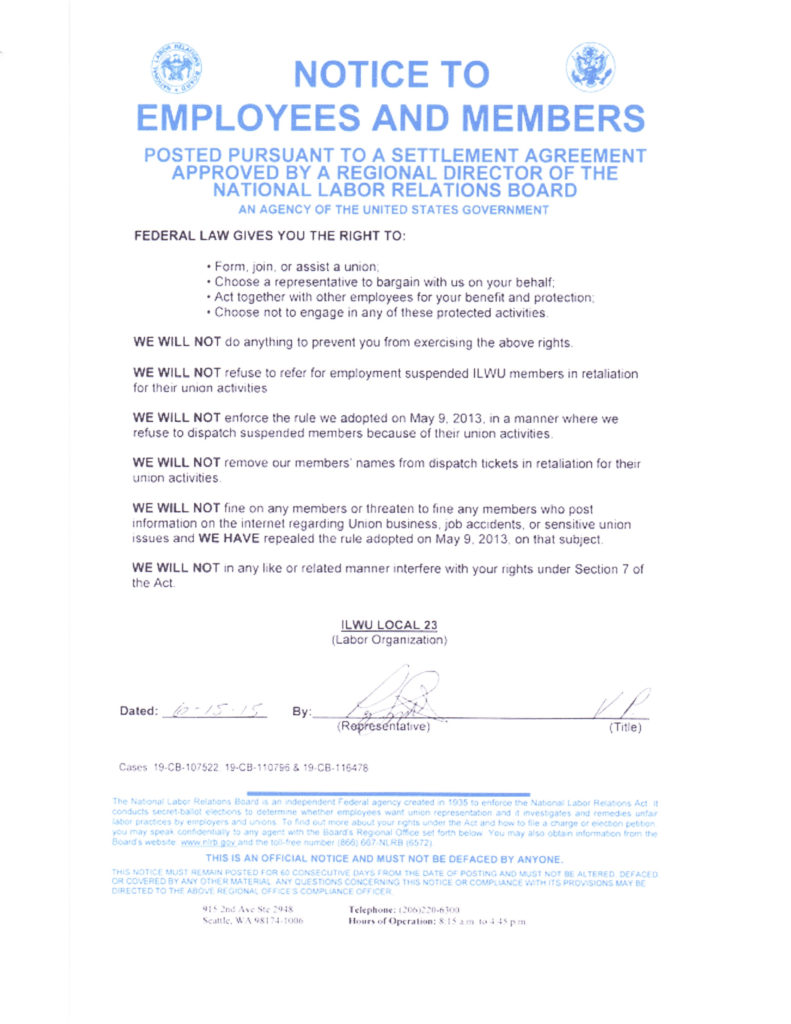 The NLRB decisions referred to in Dean’s memo are based on his lie, contained in the last sentence of his memo.

Dean claims Eric is not allowed to be dispatched to the non-PMA SIM rail ramp job because he is “not eligible to line up for dispatch out of the Tacoma JPLRC dispatch hall.”

The non-PMA SIM rail ramp job is NOT dispatched out of the Tacoma JPLRC dispatch hall, it is dispatched “through the office of the Union.” 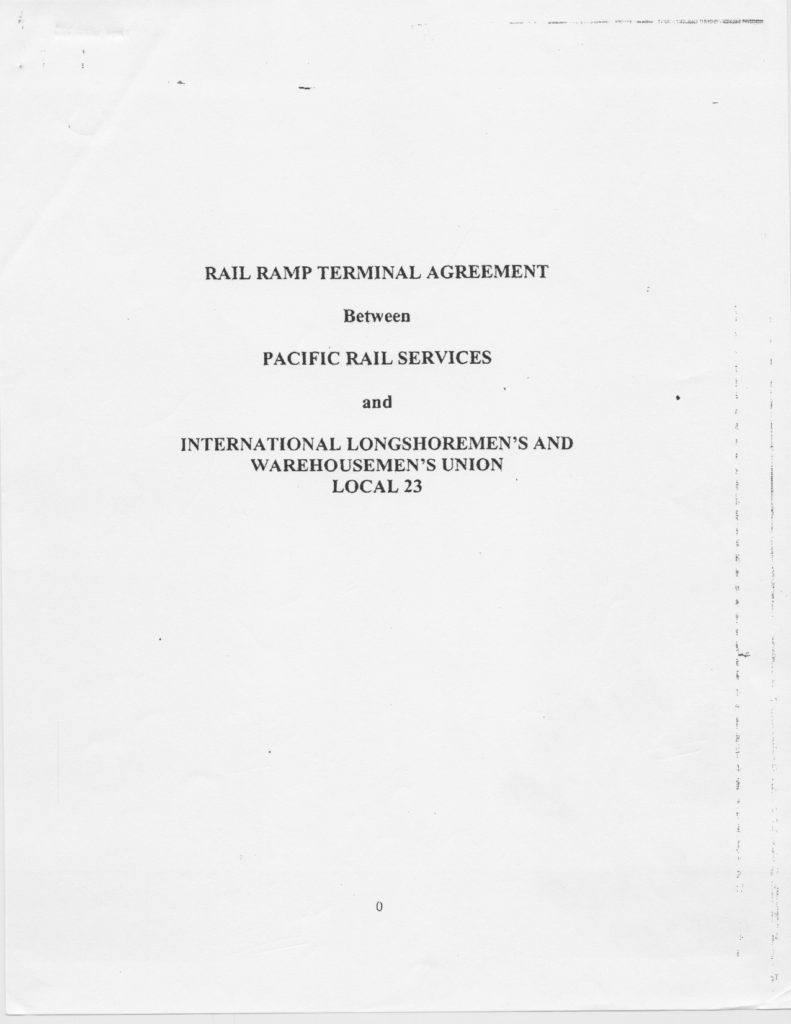 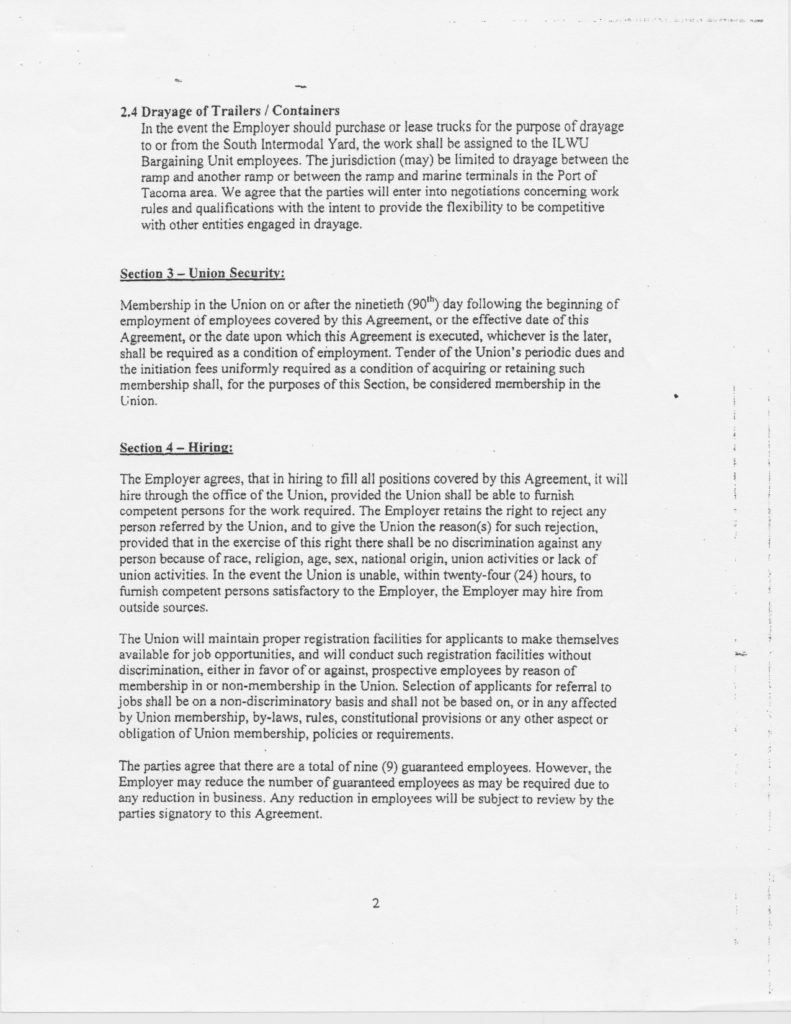 The proof that Deano is a liar, is the letter PMA wrote in response to a claim that Eric working at the SIM was a violation of the Arbitration Decision placing him on no-dispatch to PMA jobs.

In January 2017, Eric was placed on 1 year no-dispatch for his political cartoon about the Walking Boss shape-up going on every night in Los Angeles.

Eric came up to Tacoma, told the dispatcher he was on no-dispatch to PMA but he was a member in good standing and was dispatched to the non-PMA SIM rail ramp.

Eric worked for 2 weeks, until Dave Basher told him he was not allowed to be dispatched because of an alleged  letter from the CLRC. A letter that does not exist.

Local 13 and John Seixas claimed that Eric’s working at the SIM was a violation of the Arbitration Decision placing him on no-dispatch.

PMA responded with the following letter; 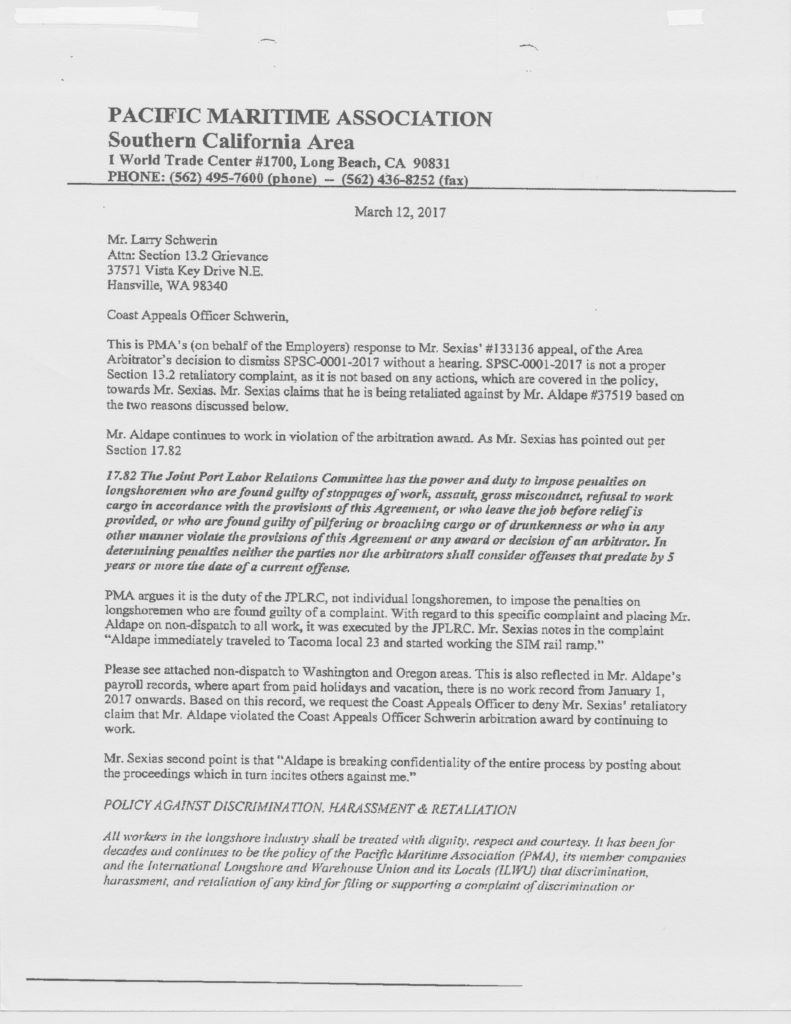 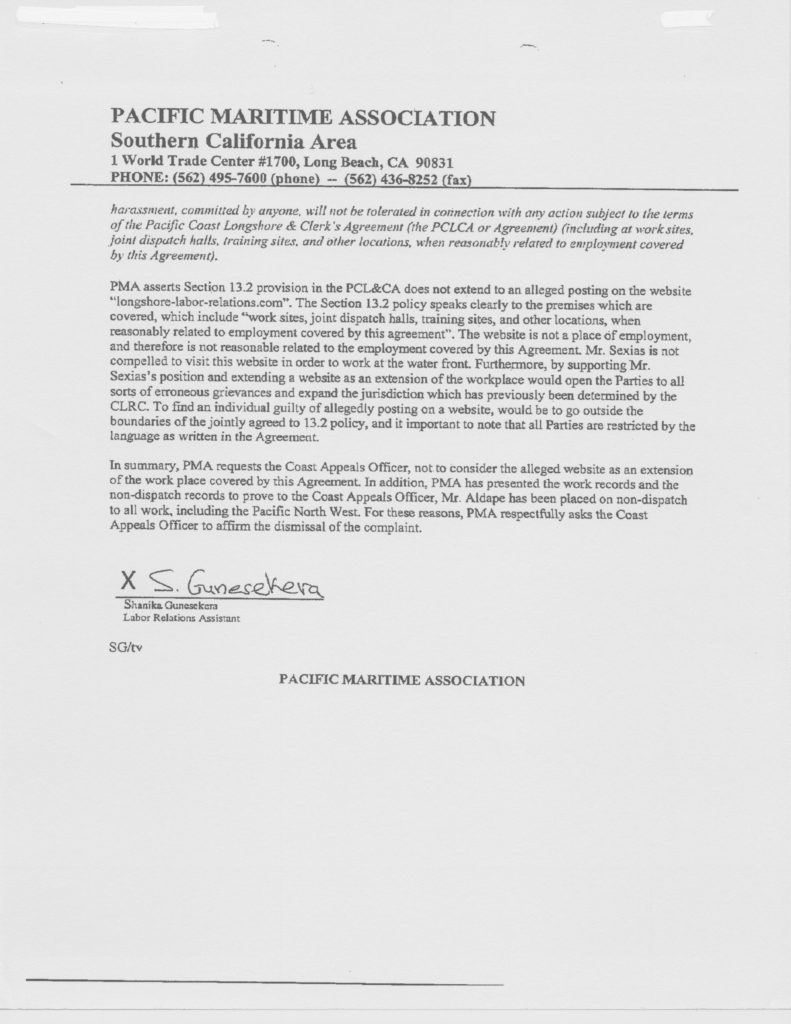 According to PMA there is no work record for Eric from January 1, 2017, forward.

PMA has no knowledge of Eric working at the SIM rail ramp because it is a non-PMA job, is not dispatched through the ILWU/PMA dispatch hall, and the payroll for work done at the SIM is not processed by PMA.

Dean is a liar.

Eric was not deregistered from the industry, and the job Eric is seeking is not dispatched through the Tacoma JPLRC dispatch hall.

Interesting how Dean is so concerned abut his family that he begged the Coast to pay for his kids to fly to San Francisco, and when he was turned down he and Dave Basher decided to steal the money from the members of Local 23, but he does not give a damn about Eric’s family when he refuses to dispatch him based on lies.

Dean is a liar and a hypocrite, pretending to be a Union leader.

Harry Bridges’ statue should be removed form Local 23, they do not deserve it.

What do you call a man who refuses to dispatch a member in good standing, based on an alleged rule, then refuses to give the member a copy of the alleged rule?

You call him Dean McGrath, President of Local 23.

Pirate Dean McGrath was recently called out by one of his members, for stealing from the membership. 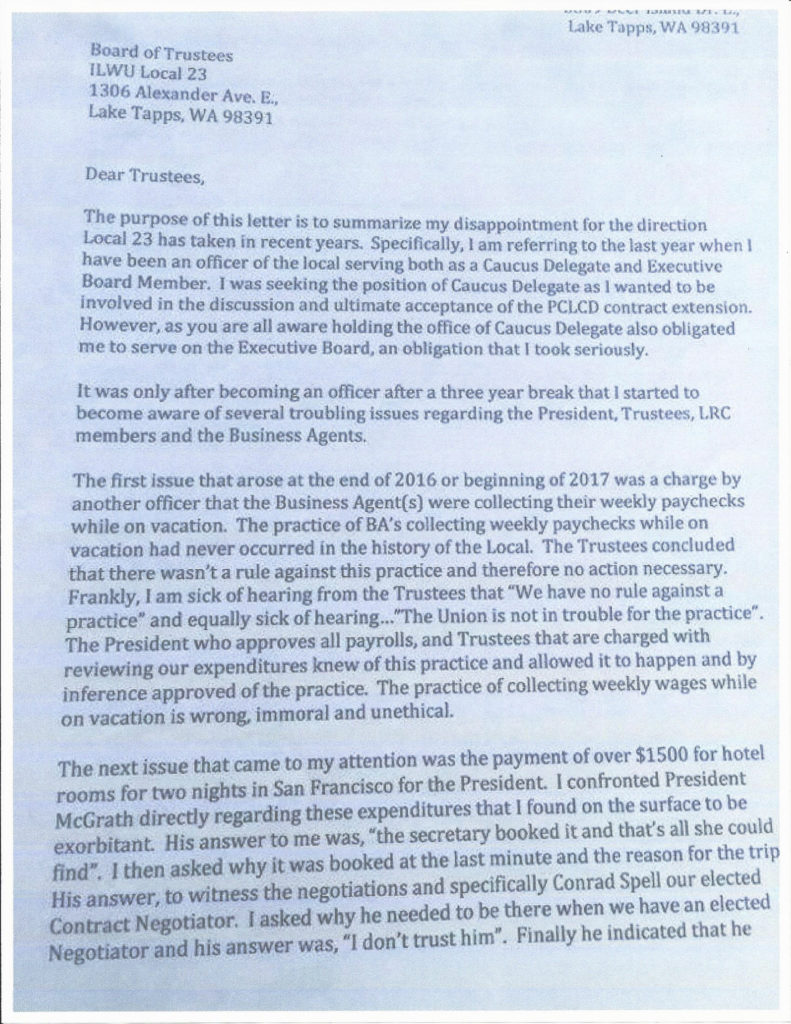 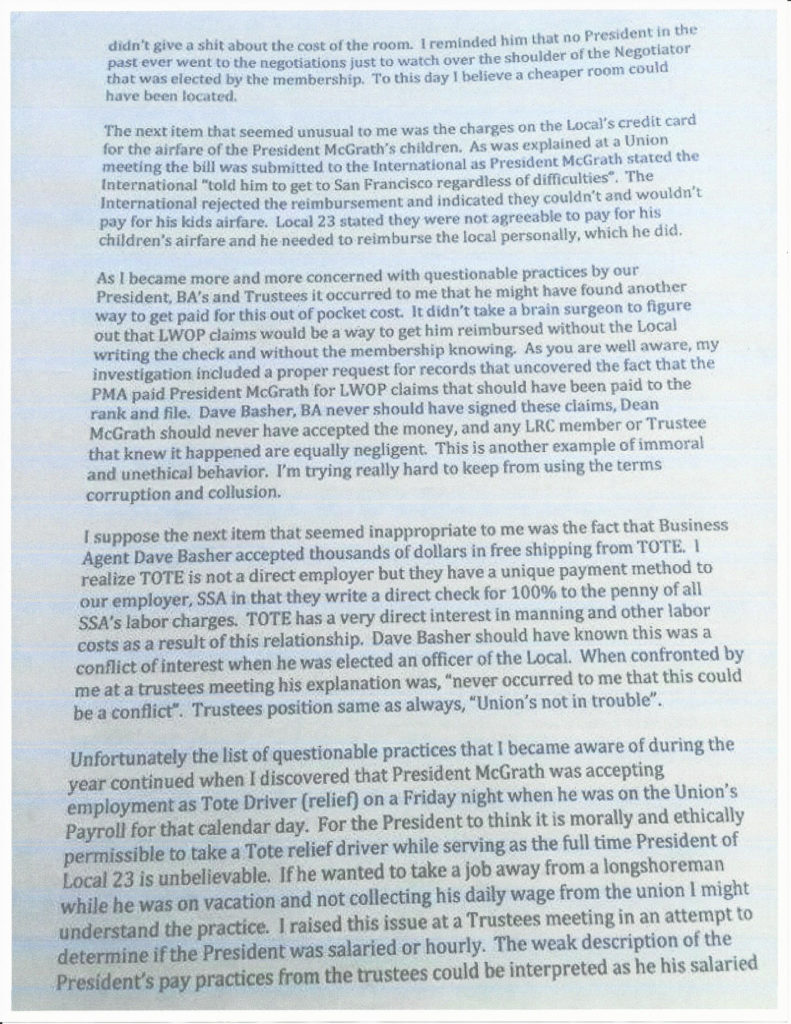 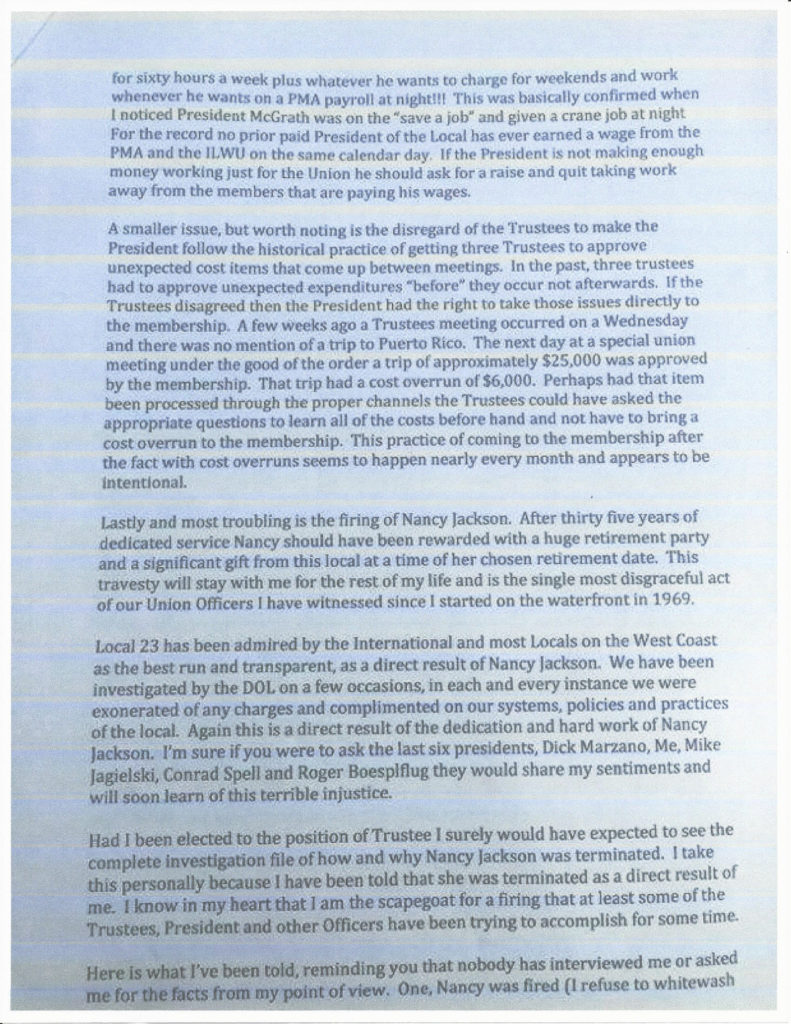 Dean and his buddy, Dave Basher, are giving Dean in-lieu-of payments that should go to the next member in line for a job, who did not get one, because Dean has been crying that his $169,000/yr salary is not enough to live off.

Dean gets $169,000/yr for doing basically nothing, but he feels entitled to more.

Dean gets paid to go on trips with his buddies at the Port of Tacoma, who love to show off their “workers” to their overseas partners, while claiming to be doing research in Ports all over the world.

Dean is the perfect example of a greedy stupid Union leader, that employers use to beat down real Union organizational efforts.

Yesterday, Dean told Eric Aldape, Local 13 member in good standing, that he was not going to allow him to be dispatched to the non-PMA rail ramp job at the SIM.

When asked why, Dean said there was a rule preventing deregistered longshoremen from being dispatched.

When asked if this was the same rule the Local agreed NOT to enforce in the settlement posting from the NLRB Case 19-CB-107522 et al Settlement Agreement, Dean said it is not that rule, it is a different rule that was adopted at the same time.

If you have any doubt that Eric was deregistered because of his Union activity, please read 014 022018 First Amended Complaint.

When asked how it is possible to have a rule that would prevent a member from being dispatched to the SIM, when Section 4 to the Rail Ramp Terminal Agreement specifically states; “Selection of applicants for referral to jobs shall be on a non-discriminatory basis and shall not be based on, or in any affected by Union membership, bylaws, rules, constitutional provisions or any other aspect or obligation of Union membership, policies or requirements.”  Dean just said they had a rule.

When asked for a copy of the rule, Dean said; “you are not getting a copy,” and hung up.

This is what Bob McEllrath and his corrupt followers like Dean McGrath have turned the ILWU into.

It is no longer a Union, it is a social club, run by criminals and x-cops.

This is far from over Deano.