Round 1 went to the little guy. The Judge denied TTI’s and SSA’s motion for a Temporary Restraining Order. 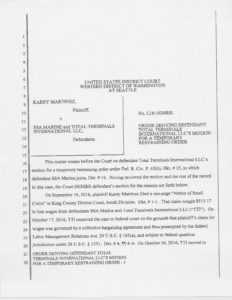 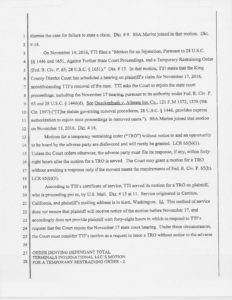 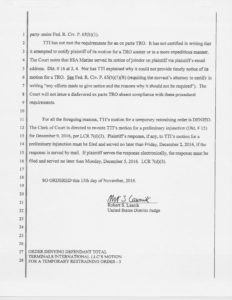 Or for those who prefer PDF format: us-district-court-order-denying-tti-ssa-motion-for-tro.

If you think that slowed down the lawyers with the big underwear, you would be mistaken.

The day after the Judges’ denial they filed the following paperwork, doubling down on trying to pressure the little guy into dropping his Small Claims case. 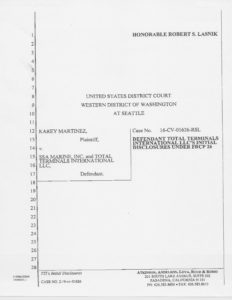 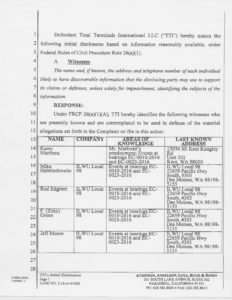 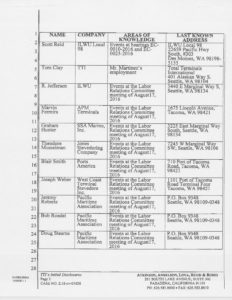 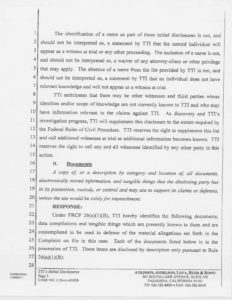 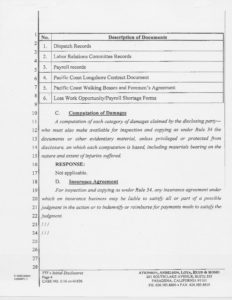 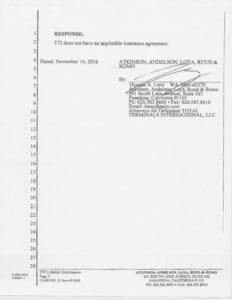 Or for those who prefer PDF format: tti-initial-disclosures

Check it out, 15 witnesses, none of whom were in Small Claims Court, and all of whom may or may not have anything to say.

This is a classic lawyer put-on; a mixture of word fogging and half truths with the illusion of relevancy, pretending to have what they lack.

According to Sydney C. Schweitzer, in his book Winning with Deception and Bluff; “To manipulate the ordinary so it looks extraordinary, is the highest form of deception.”

The lawyers with big underwear are taking an ordinary Small Claims case over $515, and trying to make it look extraordinary by claiming their clients will be “stripped of their collective bargaining rights” if the case is even allowed to go forward.

They are well aware of the Robert K. Frazier, an individual v. ILWU Local 19 and PMA, [westlaw-frazier-case]  where it is clearly spelled out that an individual only has the right to file 2 kinds of complaints under the PCLCD: Discrimination grievances under Section 17.4, and a grievance regarding job dispatching under Section 17.73 related to individuals returned to the dispatch hall by the Employer.

The Small Claims Court case is neither a claim of discrimination nor a claim that someone was improperly returned to the dispatch hall by the Employer, and therefore not covered by the grievance procedures of the collective bargaining agreement.

Round 2 has yet to be determined.

If you think that the ILWU are the only thugs on the waterfront, you are wrong.

TTI and SSA are going all in to beat down a longshoreman from Local 19, Seattle, who dared to file a $560 Small Claims Complaint for wages lost because of the actions of the Employer, and by all in I mean lying like rugs.

TTI’s Representative on the Seattle JPLRC decided to help Rich Austin’s buddy Local 98 President Scott Reid beat down a Local 19 member, who dared to question his actions and decisions, by making sure that they did not process his grievance until after the afternoon dispatch so he would miss a job.

TTI’s Representative on the WB JPLRC, and Reid, rubbed it in his face by granting another longshoreman’s request to have his case heard so he could get to the 3 PM dispatch, while he was made to wait.

Rich Austin has stated to his members that he will not process any grievances that he does not want to, and there is nothing they can do. He is right, the Union owns the grievances and the individual filing the grievances can do nothing about it once they give it to the Union, with the exception of Section 13 discrimination complaints.

The Local 19 longshoreman knew that if he filed a regular grievance Rich would just kill it, so he did something that has not been done since Harry Bridges ran the Union, he educated himself and got creative.

Karey found a Washington State Law that allows employees to file claims for lost wages against employers who are responsible for the loss, and he filed a Small Claims Court suit against TTI and SSA for causing him to miss dispatch and lose wages.

TTI and SSA responded to the $560 Small Claims complaint by filing their own lawsuits claiming the matter needs to be moved to Federal District Court, and threatened Karey claiming he will have to pay all their court costs and lawyers fees.

Here is where the big time lies start to fly, because in order to get an injunction TTI and SSA have to show that if the Small Claims case does not get moved to Federal Court they will suffer irreparable harm.

Here is the big fat lie of Robert Johnson, Vice President of Labor Relations for TTI; 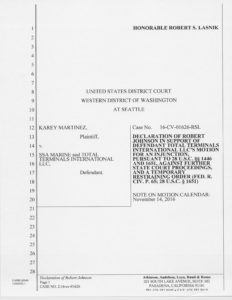 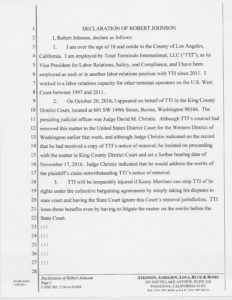 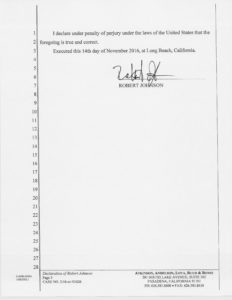 Or for those who prefer PDF format; declaration-of-robert-johnson-tti-vp-lr.

The Employers cannot bring their lawyers into Small Claims Court so they decided to use their lawyers to file an Injunction in Federal Court claiming, TTI will be stripped of their collective bargaining rights if the Small Claims case is allowed to go on.

According to PMA; “Like most collective-bargaining agreements, the PCL&CA generally allows only the parties to the agreement access to the grievance and arbitration process. Individual workers generally cannot advance a grievance to arbitration.”

Individual workers do not have the right to file a grievance like the one Karey filed in Small Claims Court.

TTI’s and SSA’s collective bargaining rights will not, and cannot, be “stripped” by one longshoreman filing a Small Claims Court case related to something not covered by an agreement he is not party to.

Robert Johnson is a lying sack of shit, and his declaration is proof.

What kind of assholes file in Federal Court, naming someone else as plaintiff, then threaten to bill them tens of thousands of dollars unless they drop their $560 Small Claims case?

Rich Austin’s buddies at TTI and SSA, that’s who.

Is the Judge they are trying to dupe going to allow TTI and SSA to move Karey’s Small Claims case to Federal Court, using flat out lies?

We will let you know……