When Union member Eric Aldape showed up in Seattle last Friday, to help a Union Brother by representing him in his Section 17.4 hearing related to his Section 13.3 claim of discrimination, Local 19’s President, Rich Austin said he was not going to allow it.

Rich turned white as a ghost when he saw that Eric was standing outside his Local, then told Eric that he had been disrespected because Eric did not call and tell him he was coming to Seattle.

The rest of the boys were pretty wigged out as well. One actually came over to Eric and asked why he was touching the truck he happened to be standing next to while he was waiting outside the Local. Nice guy.

The fun really started when they sat down to begin the hearing and Rich told Karey to sit next to the court reporter, which is where the person who will be doing the talking sits.

Eric said no, he would be sitting there as he was Karey’s representative and would be doing the talking.

Rich said no, stood up, said he wanted to caucus, and left the room.

Rich and others told Eric and Karey that the Green Book does not apply because this is a Section 17.4 hearing.

Eric provided CLRC Minutes regarding representation and a copy if the argument he made when he represented 2 Local 13 A men at their Section 17.4 hearings, and was told the CLRC Minutes don’t apply.

After about an hour, and a lot of phone calls, PMA said that they were going to cancel the hearing to research whether or not Karey can be represented by another A-man in his Section 17.4 hearing.

Once again, PMA protected a longshoreman from his “Union.”

Longshoremen have been representing their brothers since 1934, but Rich Austin said NO, he will not allow that to happen.

What kind of pathetic Union leadership is that, Rich?

Looks like Eric will be getting another flight to Seattle, but he won’t be flying First Class like Rich Austin does.

What I would like to know is, why did it take so long for someone to do what Eric is doing? 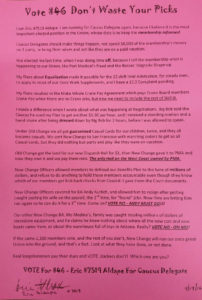 When Rich Austin, Local 19 President, was confronted by one of his members regarding his flying First Class when on Union Business, he admitted that he did and proudly added that a Trustee had approved it.

Does anyone really think that the Local 19 membership wants to pay for Rich to fly First Class?

Come on Rich, stop fucking your members around and do your job.

You are not, and will never be Big Bob. 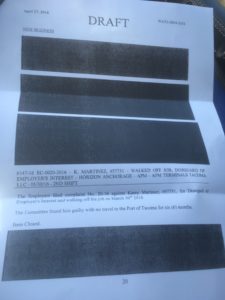 When a member asked for the Minutes from Local 23’s April 2016 JPLRC Meeting, this is what he got.

What are Dean McGrath and Rich Austin hiding?

Could it be that they are screwing their own members over, and lying to the Employers about what they are doing?

Yes, yes it could.

“Employees have a Section 7 right to discuss discipline or disciplinary investigations involving their fellow employees,” according to Banner Health, 358 NLRB No. 93 and other NLRB Decisions including the following Advice Memo. 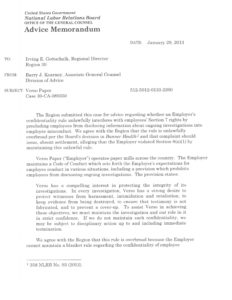 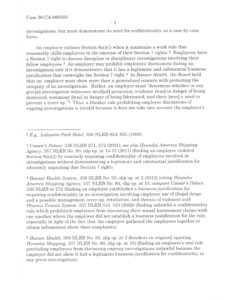 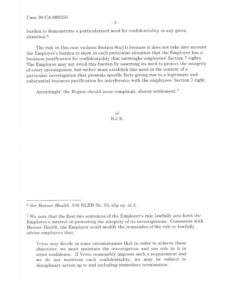 It started with the bullshit blanket confidentiality claim in the Special Grievance Handbook related to Section 13.2 Discrimination  “privacy rights,” which do not exist in the work place unless it is to protect the employers “legitimate and substantial business justification,” and now bullyboy Union Officials like Dean McGrath and Rich Austin have taken it to a new level.

The NLRB is now investigating Amended Charges against both Local 23 and Local 19 related to their thug practices.

Not everyone is afraid of bullies like Dean and his little helper, Rich Austin.

Both of them have some “esplaining” to do the NLRB investigator, then we will see what kind of Minutes they give to members.

Fuck both of you motherfuckers.

Based on what I have heard, this is what happened.

Bobby O Jr. and his boys decided that they wanted to prevent part time BA, “The Greek,” from running for the BA position, so they decided to jam him up using the Trial Committee and some in-lieu-of payments.

They got Mo “The Rat” Medina to roll on “The Greek,” but before they could go after Angelo they had to deal with the other BA, “Khuzy” and get him to stop putting his wife in for the same kind of in-lieu-of payments.

The first time they told Khuzy to stop doing what he was doing, he stopped, but then he started again.

The second time, Bobby and Frank confronted Khuzy with an envelope full of documents related to the in-lieu-of payments he had been giving to his wife. They told him if he did not stop they were going to file Trial Committee charges against him.

It worked, and Khuzy resigned, and so did “Fat” Nacho the Dispatcher.

You see, the in-lieu-of scam only works if you have a Dispatcher in the loop.

Here is how the scam works.

The BA “finds” some jobs that he “talks” the employer into hiring. He then calls the Dispatcher who creates some Form 3s.

The “late order” Form 3s are created by the Dispatcher who fills them any way he wants to, then the Form 3s just vanish, poof.

In Khuzy’s case it seems that the “found” jobs came with instructions to make sure his wife got one of the Form 3s.

After Khuzy stopped the first time, Bobby and his boys made their move on “The Greek,” using Mo “The Rat” Medina to roll on Angelo, and filed a Trial Committee charge of conduct unbecoming against him.

Angelo filed a counter conduct unbecoming charge against Bobby for doing the same thing. Bobby used his influence to get his “body guards” put on the payroll, at PASHA, when he went to the Mayor’s victory luncheon at City Hall. Khuzy changed his story and covered for Bobby, so he got a pass, until he started again. That’s when the second meeting took place and Khuzy resigned.

Because Bobby’s boys (Fat Boy John “Jabba the Hut” Seixas, and Dumb Shit Larry Toledo) controlled the Trial Committee, the charge against Bobby was found to have no merit, and not processed, while Dumb and Dumber found “The Greek” guilty as charged and disqualified him from running for Union Office for 13 years.

Thirteen (13) years is the maximum time a Union member convicted of a felony, in a Court of Law, can be bared from running for elected positions. In a Court of Law, as opposed to the Kangaroo Court run by Bobby and his boys.

We agree with Harry Bridges; when the rank-and-file gets all the information they will do the right thing.

This is not all the information, but it is more than most members have.

Do the right thing: VOTE.

Work dodger Victor Hudak took the day off yesterday and today, to campaign at the Dispatch Hall, and decided to put his blue fliers in front of Eddie’s white fliers, and Eric’s orange fliers. Nice move from the man in charge of the elections.

Poor little Victor the work dodger is crying on Facebook about everyone picking on him. What a fucking pussy!

Victor Hudak is the one who paid his father $23,000 to put new windows in the Memorial Hall, while claiming he does not do favors for his friends.

Aside from dodging work and “watching” the secretaries, which Victor says is his job, he has done nothing for the membership unless you are a Dispatcher, or other elected Local 13 Officer.

Victor let Julie Brady check out of her elected Chief Dispatcher job and call her own replacement so she could put herself on the payroll as the DHA, a job paid for 100% by PMA and supposedly picked by PMA. That’s a favor Victor!

Victor also let “Fat” Nacho resign from his Dispatcher job at the same time as Business Agent Andy Kustich resigned to cover up the scam they were running with the BA “finding” “late orders” then turning them over to “Fat” Nacho to fill any way he wanted, as long as one of them went to “Khuzy’s” wife; then the Form 3’s that got used just disappeared. That’s another favor Victor!

Poor little Victor, is a dirty ball washer who has to go.

The latest Local 13 Election Flier from Activist Eric Aldape is all over social media. 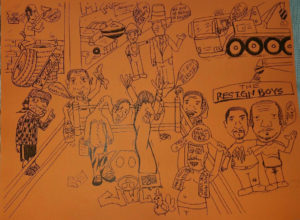 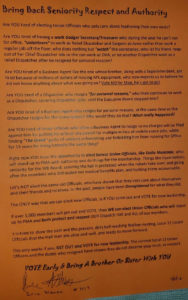 If over 3,000 or more members of Local 13 vote in the Fall 2016 Elections, the Ball Washers might be able to spend more time golfing.

Wouldn’t that be nice?