Eric “The Activist” was re-elected to the Grievance Committee and the Executive Board by Local 13’s rank-and-file.

At tomorrow’s stop-work meeting Bobby is going to swear Eric in to his elected positions, however either before of after that, Bobby is going to preside over his crack rat buddies, John “Boy Toy” Seixas and Larry “Two Dogs Humping” Toledo’s Trial Committee decision to have Eric kicked out of the Union, without telling him what it was that he did, exactly. 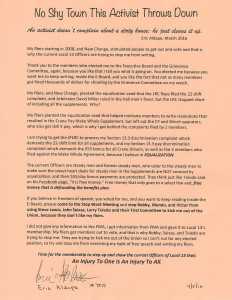 0Shares
« The “neutral” from “outside the industry” ILWU/PMA Section 13.2 Coast Appeals Officer has been hired. ILWU attorney for the last 30+ years, Larry Schwerin will “begin administering and adjudicating” effective March 2, 2016.
Bobby O Jr. and his crack head buddy, “Two Dogs Humping” Toledo, are about to learn an important lesson in Unionism. The ILWU does not “kick members out” because some stupid fucking moron like Larry does not like a flier. »