With help from one of the Hall Crane Drivers who happens to believe in equalization, the first 2 (Lee White #130783 & Carlos Meza #130682) of the 63 qualified crane drivers removed from the Supplemental Crane Board on August 8th have filed Section 13.3 Discrimination Complaints related to the Employers implementation of the “Local 13 Crane Training Agreement.”

The Hall men are fed up with being pushed around by steady men Union Officials and their buddies, the steady men Employers at PMA.

The Complaint is 32 pages long, including all the attachments, and can be viewed by clicking the hyperlink at the end of this post.

The basic argument is as follows:

According to Local 13 Bulletin #35-15, effective 8-8-15 “the Employers” violated Section 13.3 of the PCLCD, when they unilaterally and prematurely removed 63 “qualified” crane drivers, including Carlos Meza #130862 & Lee White #130783, from the Supplemental Crane Board, allegedly using the “Local 13 Crane Training Supplement” as their justification.

The “Local 13 Crane Training Program” is a Tentative Agreement signed the same day as the PCLCD Memorandum of Understanding, February 20, 2015, but it was NOT included in the MOU.

The “Local 13 Crane Training Program” is a subterfuge created to give more hall work to the steady men, who as of August 8th can take jobs ahead of the 63 qualified but not trained men who were removed from the Supplemental Crane Board, while attempting to buy off the hall crane boards with a guarantee of 10 hours of crane pay Monday thru Friday, if they work other than crane jobs.

The Local 13 Crane Training Agreement changes the wages, hours, and working conditions of both the hall crane drivers and the steady crane drivers, but is not in the PCLCD or the Local Port Supplement, just like the $55 per day paid to the dayside steady men.

The Employers have been gimmicking the pay given to steady men for years by paying the dayside steady men $55 per day, under the table.

The “Local 13 Crane Training Program” is their latest gimmick, and a subterfuge that violates the Section 18.1 Good Faith Guarantee, and places restrictions on longshoremen that are in conflict with the provisions of the February 20, 2015 Memorandum of Understanding, as ratified by both PMA and the Union.

The alleged “Local 13 Crane Training Agreement” is not signed by any Local 13 Officers, or any PMA members of the LA/LB JPLRC, was not printed in the Dispatcher as part of the MOU, was not put into the Los Angeles/Long Beach Crane Operator Addenda of the PCLCD, and has not been mentioned in any CLRC Minutes.

That being said; item 2 of the Local 13 Crane Training Agreement states:

“Individuals currently on the qualified list (who have 200 hours or more at the date of ratification or upon July 1, 2015) shall remain eligible to take crane jobs for a period of one (1) year from the date of ratification as long as the Crane Training program continues to train at a pace of one hundred (100) students per year and may be extended only by mutual agreement.”

“Effective Saturday August 8, 2015 the only individuals that will be eligible to check-in on the Supplementary Crane Board are those individuals that are currently in the Crane Training Program and have successfully completed the Transtainer portion of training.”

Effective August 8, 2015 the Employers unilaterally removed 63 qualified crane drivers from the Supplemental Crane Board in violation of item 2 of the Local 13 Crane Training Agreement.

“Grievances and complaints alleging that a contractual provision or rule is discriminatory as written or as applied, … are to be filed and processed with the Joint Port Labor Relations Committee (JPLRC) under the grievance procedures in Section 17.4 of the PCLCA.”

“All other restrictions on the employer or longshoremen that are in conflict with the provisions of this Agreement are null and void. There will be no unilateral “hip pocket” working or dispatching rules.”

“Rule 6 on its face is, per se, discriminatory in view of the unambiguous language of Section 8.41”, “Section 13 is applicable to all provisions of the PCLCD”, and “Rule 6 in this case, is on its face in violation of Section 13.”

Coast Arbitrator John Kagel in his Decision C-02-04 makes it clear that in order to claim conflict with the Agreement there must be a prima facie showing that the language in dispute conflicts with the PCLCD.

In this case the agreement to pay Local 13 Hall crane drivers Skill III crane pay when they work Skill II or Skill I jobs, is a violation of Section 4.31 which states:

“Wages to be called Skill Rates shall be paid for types of work specified in Section 4.32”,

and the Addenda titled Guarantees, Skilled Rates For All Longshoremen And Clerks which states:

“Employees shall be paid at the appropriate shift and skill rates of pay in accordance with Sections 2 and 4, PCL&CA, and the provisions herein. Individual side agreements, including paid hours in excess of the PCL&CA, as defined by Area Arbitration SC-29-79, between individual employees or local Union Officials and individual member companies shall be considered a Contract violation.”

Paying the Hall crane drivers the 2 hours extra that crane drivers get, plus the difference between Skill I or Skill II and Skill III crane pay in dollars, with no hours associated, and paying the day side steady men $55 per day under the table are clear violations of Section 4.32 and the Addenda, and constitutes fraud against the benefits that asses all hours paid.

No assessments being paid for the extra crane hours, or the $55 per day paid to the day side steady men, has Coast wide significance as it relates to the low man out dispatch system as well as qualifying and paying for vacations, holidays, and medical benefits funding.

The “Local 13 Crane Training Agreement” is NOT part of the PCL&CA. The Tentative Agreement is not signed by any Local 13 Officers, or any PMA members of the LA/LB JPLRC, was not printed in the Dispatcher as part of the MOU, was not put into the Los Angeles/Long Beach Crane Operator Addenda of the PCLCD, and has not been mentioned in any CLRC Minutes.

As we see it, the Employers have 2 choices:

For the Employers to continue doing what they are doing constitutes an ongoing violation of Sections 4.31, 13.3, 18.1, 24.2 and the Guarantees, Skilled Rates For All Longshoremen And Clerks Addenda of the PCLCD. 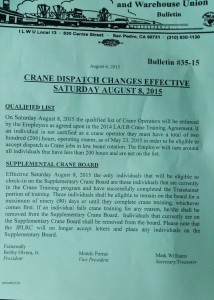 2Shares
« Is the Local 13 Crane Training Tentative Agreement part of the PCLCD, or a phony “hip pocket” Agreement?
If you, or someone you know, were fined by the Local 13 Grievance Committee for chiseling or any other alleged dispatch rule violation, you may be eligible to have your fine expunged and any money you paid refunded. »