It seems that Victor Hudak and Julie Brady don’t care that Bobby O Jr. made a ruling that Julie, elected Chief Dispatcher, is not eligible to work as the DHA.

Bobby made a big deal about Julie checking out of her Chief Dispatcher job, told her to knock it off and told Victor to do his job; that Julie she was elected as Chief Dispatcher and she is not allowed to take any other job.

Last week, after Bobby’s ruling, Julie checked out of her Chief Dispatcher job and put herself in as DHA for 2 days.

According to Victor, Julie is the only one “trained” to do the DHA job, which is funny because the DHA job is a PMA pick, non-elected, 100% paid by PMA, Dispatch Hall job.

Right, Julie got the same training as all the previous DHAs.

Zero, nada, none, that’s the training Julie got.

Victor and Julie are both doing whatever they feel like; as usual.

Oh, and do not say anything negative, or question their decisions, or ask to see anything in writing: that is anti-union.

Bobby, Mondo, Victor and Julie are turning the ILWU into a joke.

Who is running the show? 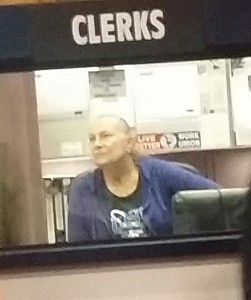 Not the rank and file; an interpretation was made at the last Union meeting, directing Julie to knock it off.

Victor told the E-Board that a complaint had been filed, but he went right back to doing what he was doing; because he knows that the complaint won’t be processed by Luke and Mondo.

What are Luke, Mike, and Mondo doing with all the discrimination complaints, including the one against Julie?