Local 19 President Rich Austin, his big mouth, and his bully boy tactics have resulted in the following NLRB Complaints against PMA, Local 19, and the ILWU International; 19-CB-190139 and 19-CA-195788 Complaint and Hearing Order. (A corrected copy will be available shortly)

This is all thanks to Rich Austin shooting off his big mouth, at the October 13, 2016, Union Meeting. 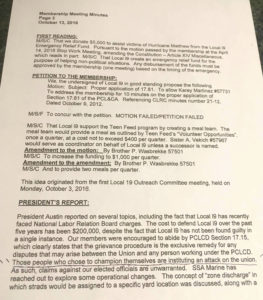 Rich wrote down what he said, and what he said is unlawful. Rich is not going to weasel his way out of this one.

The NLRB decided that not only is what he said about going to the NLRB being an attack on the Union unlawful, the Region also decided that the language from Section 17.15 requiring the PCLCD grievance procedures be exhausted before seeking other relief is also unlawful.

The Union needs to teach their members that the NLRB was established to protect Unions and their members, and “going to the outside” is not an attack on the Union, it is your right.

The question of whether or not the PCLCD, and PCCCD, have been printed is of interest because the NLRB wants the language in Section 17.15 changed.

Is Big Baby going to settle and admit no wrong doing, or take it all the way and give me my first winner, winner, chicken dinner?

What do you say Big Baby?

0Shares
« Why would PMA and the ILWU collude, and lie under oath, during an NLRB hearing?
Big Baby must be worried about the NLRB’s latest Complaint, he got his buddies at PMA to bring in the lawyers that wear the big underwear. »