Local 23’d pathetic effort to have their Secretary, who is married to a longshoreman, claim she is being “berated” by workers who are asking for copies of JPLRC Minutes, did not work.  Now Local 23 has a date to explain themselves to a Judge on October 10, 2017. 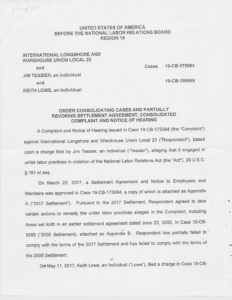 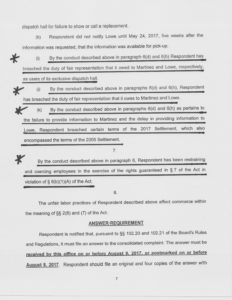 For those who want to read the entire Complaint and Notice of Hearing click here: NLRB 19-CB-198689 consolidation:revocation:complaint hearing notice.

Dean McGrath and the rest of the Local 23 elected Officials lie like rugs, and that is not going to get them out of this.

Deano and the rest of the Local 23 Officers don’t want workers to know what they are really doing, or not doing, because they are feathering their own nests and taking care of their friends and family, and past Officers like Conrad Spell.

Conrad got his ass kicked on the job. The Employer wrote a Complaint, and the Union moved to have it dropped, because Conrad is the current Caucus Chairman, but will be disqualified if he is found guilty of fighting on the job.

Local 23 does not want the rest of the workers to know how they go to bat for former Officers like Scott Mason, who almost killed a member when he picked up his semi and dropped him to the dock.

Nothing happened to Scott because he is a past President and friend of Business Agent Dave Basher.

If you are not a friend of Bashers, or a former Local 23 Officer, you get sent to 28 day inpatient treatment by Basher, who is not qualified to make those kinds of decisions and who does so without checking with the ILWU/PMA Subsistence Abuse program director.

Local 23 does not want workers to know what they are doing, so they deny them assess to the JPLRC Minutes.

Deano McGrath also lies to other ILWU Local Presidents. He told Local 13 President Mark Mendoza that one of his members (not Eric) could not work at the non-PMA rail ramp because the Local has a rule that prohibits it. A flat out lie.

The Rail Ramp Agreement specifically says that no union rule can be used to deny dispatch.

Time for Deano to stop lying like a rug and start acting like the guy they have the statue of in their Local; the guy Local 23 ran out of town in 1934, Harry Bridges.

Stop using his name if you are not going to follow up with actions like he would have.

See you in October Deano…….