Can’t stop Rich Austin from screwing over casuals who are not related to him. 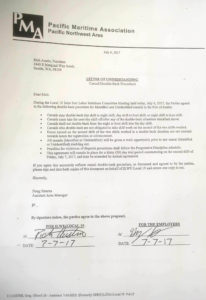 In an all out effort to boost his kid’s chances at registration, Rich Austin persuaded the idiot running PMA in Seattle, Doug Stearns, to agree to allow casuals to double-back, but decided NOT to count the hours toward registration.

What possible reason could Rich have for not giving the casuals who double-back, credit for their work experience?

The casuals in Tacoma who double out get their double-back hours counted toward industry experience, the current basis for registration. See Supplement I-A, item 6, page 173 of the 2014-2019 PCLCD. 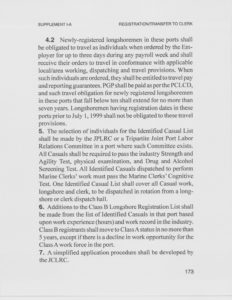 Or for those who prefer PDF; Supplement 1-A item 6.

Is the reason that Rich’s kid, or some other Officer’s kids, have a second job and can’t double-back?

Why are Seattle and Tacoma allowing casuals to double-back instead of requiring PMA to register more men/women?

What are the LA/LB casuals going to say about Seattle and Tacoma casuals being allowed to double-back, when they are not? It is the same contract.

Is Rich trying a reverse of the Jayne’s Rule scam, that he learned from his daddy?

In 1990 Jayne got experience credit for work, while he was off-work due to a job related injury. 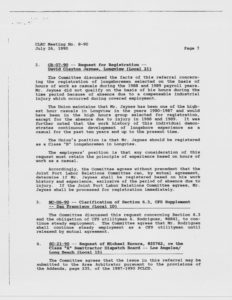 Rich and Dougie want to NOT give experience credit for work actually done? For what reason?

Did the CLRC approve this, like Rich’s daddy did with Jayne’s Rule? CLRC Meeting 8-90.pdf Jayne’s Rule

Rich you are pathetic excuse for a Union Official, just like your daddy was.

Expect a Section 13.3 grievance and an NLRB charge, for both you and your buddy Dougie.

64Shares
« Pirate Deano McGrath has another NLRB Complaint going to Trial on October 10, 2017, and Region 19 partially revoked a prior settlement agreement.
ILWU attorney Rob Remar seems to be worried about NLRB hearing scheduled for October 24, 2017. »