Last night the ILWU Community Support March started out in typical longshore fashion, when Local 13 President Bobby Olvera Jr., with his son at his side, kicked it off by waving his middle finger in the air and shouting FUCK PMA.

Great example for his son, and perfect behavior for those that think longshoremen are a bunch of over paid thugs.

Most of the estimated 5,000 who showed up are good people who believe in their Union, however, as usual a couple of bad actors, this time International Vice-President Ray Familethe and his party, including Coast Committeeman Ray Ortiz and past Local 13 Secretary/Treasurer Frank Ponce de Leon, got into an argument with the owners of the Acapulco Restaurant who refused to post the ILWU Support poster, and decided to leave without paying their $500 bill.

Police were called, but Bobby O’s connections with the Mayor payed off when the cops talked the owner out of filing charges by telling him, “I’ll look into it, but it would hurt you more.”

Check out the FaceBook posts by a couple of Local 13 members. 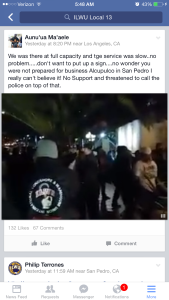 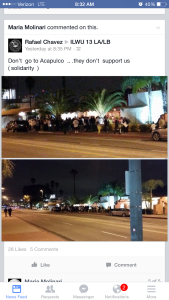 What’s next Bobby, are you going on Jerry Springer?