In the Port of Tacoma, just getting a Union Complaint form requires telling the Local 23 Secretary why you want one.

Why in the world should any member have to explain to a secretary, the reason they want a Complaint form?

It is probably because they have a complaint, which is none of her business.

When the member does get a complaint form, and sends it to the JPLRC, this is the response they get form Local 23 Labor Relations Committee Representative, Roger “The Dodger” Boespflug. 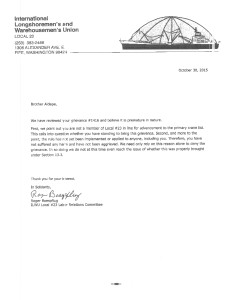 Does Roger really think only members of Local 23 have the right to file a complaint against Local 23?

Does Roger really think a rule has to be used before it can be challenged?

Did Roger really think that the “guy from Local 13” was not going to file a complaint, when Local 23 passed a rule that takes away his seniority, along with everyone else; because they have not driven cranes in the Port of Tacoma?

Did Roger forget about the NLRB posting that was just in Local 23’s Dispatch Hall related to their Internet Posting Rule, which was ruled a violation even though no one was ever “harmed”, and the rule banning members on no-dispatch from working at the SIM yard?

Why is Roger writing all this before the JPLRC has even determined if the 13.3 Complaint is “properly brought”?

They call this Union Representation in Local 23.

Congratulations Roger, you have taken Union Representation to a new low.