At the last Union meeting at Local 23, a couple of the young gun crane operators who think they are all that, with a cherry on top, took the microphone and started talking about how Tacoma needs to keep their production numbers up, and the best way to do that was to promote the home grown pumpers like them ahead of some old slow guys transferring in from other Locals.

Ergo, the new points system giving points for crane hours, only Tacoma crane hours, aka in-port hours, for advancement to the Primary Cane Board. 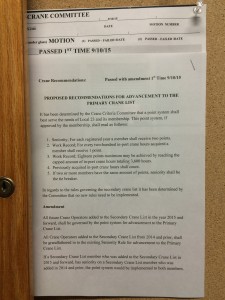 Problem is, the Points System conflicts d the Union principle of seniority and with Section 1.8 of the rules covering Transfers of Longshoremen and Clerks Between Ports. ILWU:PMA MOU Transfer rules

Today Local 23 got a Section 13.3 complaint filed against them, despite the Local’s secretary telling him he needed a Business Agent or LRC Representative’s signature in order for the grievance to be valid.

Homey don’t play that, and filed his grievance with the JPLRC and gave copies to both Local 23 and PMA.

Hey Deano, going to do the right thing and explain seniority to your little ones, or do we have to file another NLRB charge?

0Shares
« How do you get $72.16 worth of benefits for 16 cents? Convert 2 hours of benefits to tonnage, then back to dollars, using the magic PMA formula for Make Whole Crane Pay Assessments.
The new 3 Arbitrator system Big Bob demanded to replace Judge Roy Bean Miller is working, or not working depending on how you look at it. »